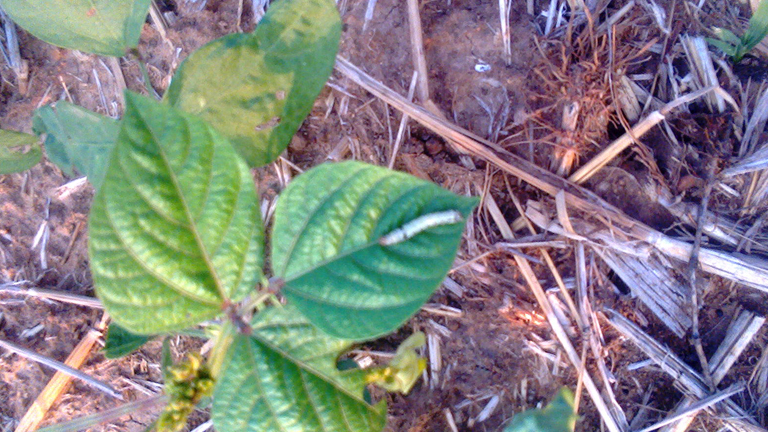 April 2017: Green gram is one of the most important crops of Koraput in rice fallow. Currently in this Rabi season 2017, green gram, black gram and groundnut are cultivated on a large scale in Kundra and Boipariguda blocks. In collaboration with the government, MSSRF supported the farmers by supplying seeds, pesticides and micro nutrient mixtures for the above mentioned crops.

The farmers in these two blocks regularly cultivate green gram and groundnut. All the farmers follow relay cropping system, seed treatment, nutrient management, and pest and disease management. Though every component is taken care climate change has a major influence on the crop performance.

Kudumpadar, a small village in Kundra Block is one among the target villages which grows green gram on a large scale. The crop foliage was very good and NEEM oil sprayed after 30 days of sowing as preventive measures. During field monitoring of green gram, farmers found their crops affected by insects around 5-10 per plant. Dr. S. Malarvannan, Entomologist visited the field with the Technical Assistants and confirmed the pest as Spodoptera litura. For the first time, in this region, possibly due to climate change effects, green gram was found to be affected by pod borer, S. litura. Each plant had more than ten 2nd instar larvae.  Earlier Neem oil spray was not effective.

The typical damage symptoms of this pest attack is larvae bore into the terminal shoot of young plant leading to complete death of development of side shoots and branches. Simultaneously the larvae bore into the pods and flower buds and cause huge economic loss. Premature shedding of flowers and pods were observed.

The pod borer was active throughout the crop cycle posing a great challenge to manage.  Attacked plants did not set seeds and farmers were more worried about first harvest or the first picking of pods. The pest crossed the Economic Threshold Level (ETL). The expert Entomologist recommended the following contact and systemic insecticides to the farmers. Three rounds of different pesticides namely Dichlorvos 76% EC, followed by Profenophos 40% + Cypermethrin 4% and finally a spray of Profen plus a broad spectrum pesticide was sprayed. Immediately after 2-3 days the insects were killed. New shoots and pods developed and the plants became free from pest.

Since it was early instar the insecticide managed the pest effectively. Other eco-friendly methods could not be adopted since it crossed the ETL. This shows how timely intervention with appropriate pesticide can revive the damaged plants and maintain the production.