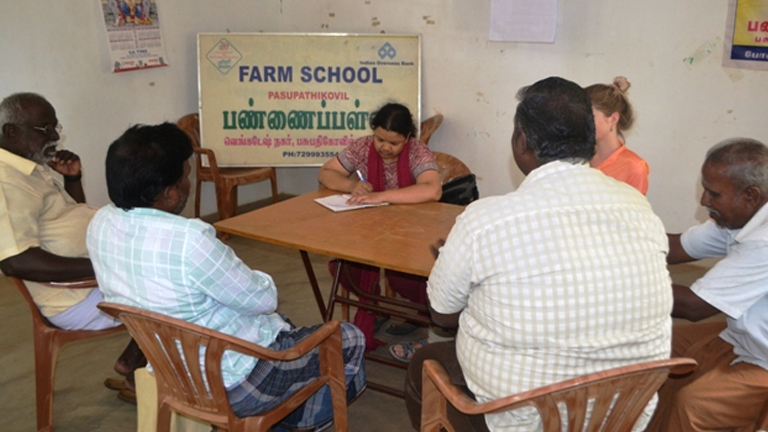 The village resource centre in Thiruvaiyaru is one of the oldest centres set up by the M S Swaminathan Research Foundation. It was inaugurated by the former Prime Minister, Dr Manmohan Singh through video conference on October 18, 2004. The VRC was supporting five VKCs i.e. in Thirupalanam, Villangudi, Rajendrem, Panaiyur and Illuppakkorai, all within 5 km radius from the VRC. The VKC in Rajendram has now been handed over to the community. The main activities of the VRC come under the broad headings of agriculture, animal husbandry, health, education, and government schemes. The VRC provides agri-based services using ICTD tools such as audio-conferencing, video conferencing, phone-in programmes, Skype calls, voice and audio messages with content prepared by MSSRF scientists along with other experts from universities and institutes situated in the region. The MSSRF scientists also visit the field to provide on-site advisories on crops based on the necessity.  They also conduct plant clinics and are also available to guide farmers at the farm schools.

One of the activities of the VRC is providing seasonal crop based advisories, from sowing to harvesting season. It has so far helped more than 500 farmers who have registered with the VRC.

Mohammad Jamali is a farmer from Vilangudi village, which is located 5kms away from the VRC. He has been using the resources of the VRC for the last 5 years. He owns 6 acres of land and has grown paddy in the fields. But there was a recurrent problem of rats, especially at the time of arrival of the shoots. “The shoots are sweet and tender and the rats would just cut away the entire stalk. I was losing about 20% of my yield,” says Mr Jamali.

At the audio-conferencing workshop held on January 29, 2019, he consulted the VRC about the problem and he says, “The experts provided me a few solutions which have kept away the rats. They asked me to close all the exit points of the rats and pour water into it. They also suggested that I keep raw papaya milk for the rats, which would kill them”.

Maheshwari is a farmer who has paddy fields in Villangudi village. She faced similar problems as Mohammad Jamali. “I put rat poison paste in cut tomatoes and kept it around the field, and it helped. I also kept cotton balls dipped in jaggery for the rats.” But as the rats reappeared, she turned to other means like blocking the exits of the rats with smoke from rice straw. She also placed scarecrows and  trunk of the coconut trees in her field, which is used as perches by the owls, the natural predators of the rats. “Now the rat population has come down significantly”, she said.

Muruganandham, another farmer from Villangudi, also faced the problems of rat infestation. He blamed it on the unclean places filled with trash located within the field. One of the advice he was given was to keep the irrigation water retained in the field at the minimum. He used the locally available traps, but found them expensive. So he combined all the procedures used by the other two farmers i.e. of keeping raw papaya and the poison in raw tomatoes and also the cotton balls in jaggery, while simultaneously leaving his fields dry. The rat problem was solved but he suggested that in the long term, one needs to keep the surrounding clear of litter, so rats cannot form colonies in the first place.

The VRC also provides advisories on livestock management, which have proved useful for the residents of the nearby villages. One of the common problems faced by farmers who own cows is foot and mouth diseases which can occur due to changes in season. The advisories are aimed at solving the problems using locally available ingredients. Murugappan from Villangudi and Ramdas from Pullanguni villages had inquired about cure for foot and mouth disease in their cows at the audio-conference held on January 11, 2019. The scientists recommended a local preparation made from fenugreek, coconut, sesame seeds, jaggery and turmeric, along with sesame oil and neem oil to be applied to the affected area for five days. They also recommended potash to wash the mouth and legs to prevent ulcers.

The farmers also faced the problem of bacterial infection of the udder among their cows. Abitha, a farmer from Villangudi village has four cows. However one cow’s udder was blocked and she couldn’t milk the cow. “Depending on the milking capacity of the cows, the scientists vary the quantity of the medicine.The scientists provided solutions using local ingredients which were very effective at restoring the health and increased the milk yield from the cows”, she said.

The farm school is located 25 kms away from Thiruvaiyaru VRC, at Pasupathikoil. The farm school encourages farmer to farmer learning. Kalaivani Rajendran, along with her husband Rajendran, are progressive farmers who provide advisories to other farmers on best practices in crop cultivation, according to the cropping season. The MSSRF scientists also help the farmers at the farm school by providing timely solutions for problems, using locally available materials. The advisories are crop and season based. The farm school is also supporting farmers for procurement of their seeds, while also providing guidance to ensure quality of the final product. Aduthurai is a farmer based in Pasupathikoil. “I was able to get 5-6 kg of extra yield by following the timely advice from the farm school and the scientists. The others in my village did not follow the advice at the appropriate time, so they faced some losses”, he said.

The farmers here have the option of selling the local rice variety, the mapillai samba, which is selling at the rate of Rs.75 to Rs.90 per kg. The rice is high in nutrients, but farmers did not cultivate and sell it because of lack of demand. The farm school has been providing information to the local farmers to take up such traditional varieties which may increase their returns in future.