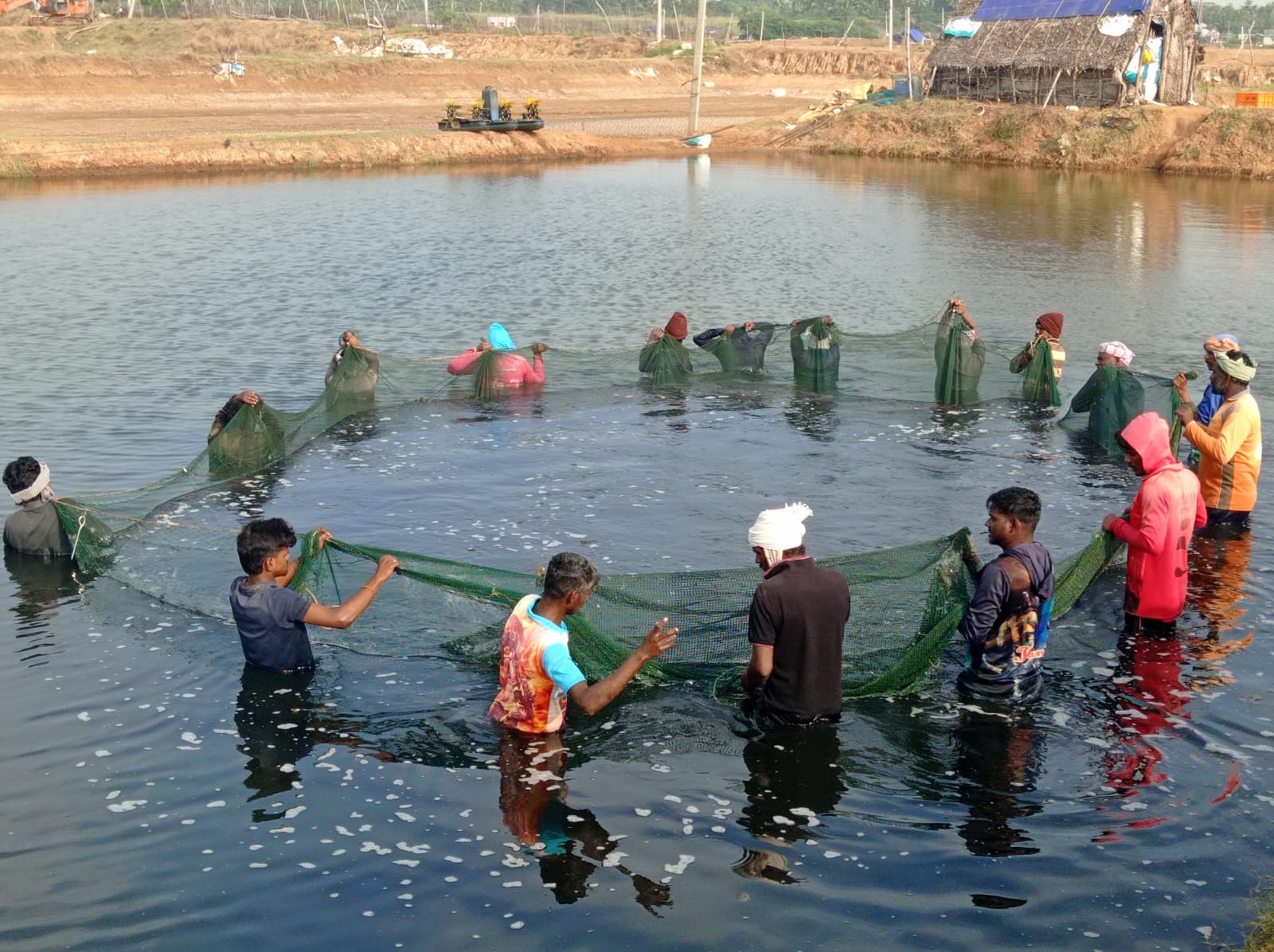 Shrimp farming has been widely promoted by development agencies and international financial institutions as a means of reducing poverty, creating employment, and generating revenue (Rivera-Ferre, 2009)[1]. Though shrimp farming provides potentially high economic benefits than agriculture, very high-level risks are associated with this process. It is evident from our study that shrimp farming is not only owed to agro-ecological changes but also has multiple phases of impact on the agrarian community. The narratives below explain how the predominant paddy-cultivated agrarian community turned out to be socially and ecologically vulnerable.

Until the early 1990s, agriculture was one of the key economic activities and sources of income in our study area – a coastal village in Mayiladuthurai District, Tamil Nadu. The high atmospheric temperature in the summer season from April to May continued the decline in stream flow in the sub-basin of the Cauvery river, coupled with over-exploitation of groundwater, increasing soil salinity and seawater intrusion adversely impacted agricultural production. At the same time, the Indian seafood industry has had a significantly higher export potential. With the establishment of the Marine Products Export Development Authority (MPEDA), most agricultural lands in the coastal regions have been converted into brackish water aqua farms, and our study area is no exception.

Shrimp farming is appealing to many small-scale farmers because of its short-term high economic benefits in the context of decreasing income from crop cultivation. However, issues in aquaculture such as marginalisation, displacement of women labours, and land conversion, have led to increased socio-economic disparities within communities. There are also other concerns with shrimp aquaculture. Besides, small-scale shrimp farmers are heavily reliant on feed and other input supply companies that give them inputs on credit. The feed dealers are also shrimp traders – anyone who buys feed from them without paying a deposit must sell their final harvest to them solely. As a result, certain key players earn greatly from shrimp farming by monopolising and integrating input supply and procurement chains, only to deepen the vulnerabilities of small farmers.

The vast majority of shrimp ponds are unlicensed and do not follow MPEDA requirements. Majority of the farmers and villagers have expressed concern about such illegal shrimp farming, however, concerned authorities have not taken preventive measures. The degraded agricultural lands are expanding mainly due to increasing soil salinity as an impact of shrimp farming and is an advantage to expanding the shrimp farms. The poor landowners — whose lands are affected by such cascading impacts of salinization — are frequently forced to leave the field fallow or sell their farms to aquaculture operators at inflated prices.

Because of increased soil salinity, cropping intensity has dropped to 100 per cent, and farmers could cultivate only one crop effectively during the main monsoon season. Farmers prefer the medium-duration rice variety (ADT 38) instead of the long-duration variety, which was common in the past to complete the crop-growing period within the monsoon season.

Change in the land use category

Due to lateral seepage of saline water, the lands adjacent to shrimp farming ponds are not suitable for cultivation. Thus, farmers are forced either to dispose of or leave the land fallow as explained earlier. In the case of fallow, even within one or two seasons of non-cultivation lead to the proliferation of Prosopis juliflora trees that further degrade land quality. In the end, there is an increased area under ‘current fallow’ and wasteland over the period.

Shrimp farms do not require as much labour as agricultural fields, and employment options are confined only to men. Women are not preferred as labourers on shrimp farms because the nature of the work necessitates significant physical exertion. This does not imply that women who have lost their livelihood owing to the collapse of agriculture are idle. Many have discovered new means to survive by raising cattle such as cows and goats. They also earn through the 100-day work scheme (MGNREGA). The collapse of agriculture, on the other hand, has increased the burden of labour on women. The rising trend of fallow land and lower number of crops per year restrict fodder supply for cattle, resulting in a decrease in livestock rearing. This has a detrimental impact on women because they rely heavily on livestock revenue to keep their households afloat.

Traditionally, village household food security remained assured by the agricultural and fishing communities. These two communities have a structured engagement and reciprocal reliance on each other to meet food security needs. However, with the advent of shrimp farming, the village household food security is in jeopardy. Shrimp growers do not contribute to the village food production system. Shrimp is considered a wealthy, export-oriented food. So, instead of consuming shrimp locally, they sell it. Only when cultured shrimp are infected or if the number of diseased shrimps surpasses 200 numbers, or when exporters reject the shrimp produce, then farmers sell it for a low price in the local market to avoid huge losses.

Despite the glittering appearance, shrimp aquaculture farming is a major threat to the environment, food security, gender, and social equity, also agrarian relations of the community. The Central Government must regulate the shrimp farming sector by developing an integrated plan with co-management principles. Such development needs to be viewed through environmental and social dimensions, rather than only from an economic lens.