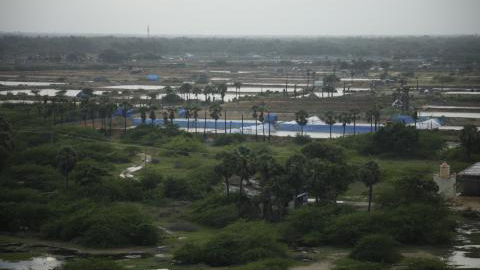 Land degradation is driven by both natural and manmade processes involving numerous complex factors. One-third of the land in India is under the threat of degradation This degraded land covers about 97 million hectares, an area the size of northern Europe. Land degradation is one of the global environmental challenges, resulting in lower productivity which adversely impacts food security and the health of an agro-ecosystem.

Unlike other agricultural landscapes, coastal areas have recorded increasing salinization in soil, water and land. Increased salinity triggers depletion of biological health and physical properties of the soil which ultimately results in the conversion of productive soil into barren, unproductive soil. A coastal agricultural region of interest is the delta region in the Sirkazhi block of Mailaduthurai district (recently bifurcated from Nagapattinam district) in Tamil Nadu, India, which area sits at the tail end of a major river in the state, the Cauvery river. Here, FP1 researchers Dr Pratheepa and Dr Rengalakshmi of MSSRF use a study carried out in this region to explain the key factors that drive the land degradation process in coastal agroecosystems, describe how degradation is impacting the livelihoods of men and women farmers and agricultural labourers, and present strategies for restoring degraded land.

he study area has been undergoing severe land degradation in recent decades owing to growing soil salinity in both wetland (paddy cultivating land) and drylands. Frequent tropical cyclones, sea-level rise, and the greater effect of the tsunami in 2004, along with anthropogenic factors in land-use systems, have been changing the nature of soil, land and water profiles. Unlike tropical cyclones, a tsunami is a rare event. The 2004 tsunami intensified a pre-existing soil salinity issue, as the farmers could no longer cultivate crops that they cultivated before 2004. The following two narratives of the farmers indicate the changes in the local agriculture production.

“2004 Tsunami created an adverse impact on the salinity of coastal aquifers, as a result, salinity of groundwater has increased that could not be used for irrigation.  Before the Tsunami we were able to raise a variety of crops such as millets, banana, tapioca, vegetables like okra, bitter gourd, brinjal, etc. now these crops are not growing here anymore.”

“The quality of the soil has changed in this village due to the Tsunami induced saltwater intrusion. We aren’t able to grow sesame or other crops in this village-like we used to”

In addition to these environmental causes, a set of anthropogenic factors was identified as key drivers of land degradation in the study area. The unregulated shrimp ponds and jetty construction for boat landing are the major factors that changed the coastal aquifers and significantly aggravated the soil salinity.

Since the early 1990s, nearly 60 ha of the cultivable farmlands were converted to shrimp farms by a private company following agreements with the farmers. The negative impact of shrimp cultivation on soil and groundwater quality was felt only after 2000. However, by this time many small farmers had started to convert their paddy farmland to more profitable shrimp ponds.

In the aftermath of the 2004 tsunami, a jetty was constructed in the interspace area of sea and river. Although this jetty was beneficial to fishermen, it was turned out to be a disaster for the farmers and the ecology of the estuary. For many decades, the Cauvery canal was the prime source of water for irrigation and domestic use. As a result of jetty construction, changes have occurred in the river mouth due to the retention of sediments and water flow. Seawater started stagnating in the canal, changing seawater quality. The jetty has removed the natural barrier between the sea and river, which disturbed the ecology of the canal, causing both the surface water and groundwater to become brackish.

The once-prosperous agricultural region of Tamil Nadu is witnessing a large-scale reduction in crop cover in recent two decades. There was 440.08 ha under crop cultivation as per census 1991, which has drastically reduced to 211.6 ha in 2019 as per the Village Administrative Office report. This shows that now about 50 percent of farmland is only used for cultivation. Owing to increasing soil salinity in the village, there have been major changes in land use and land cover that affect its productive use for crop cultivation. Due to these land quality changes, many landholders sold their land to a private company. Well-off households started shrimp aquaculture in farmland; now, a third of farmers have shifted towards shrimp farming. Increased allocation of land towards shrimp farming is thus both a cause and effect of increased soil salinity.

“Earlier we had vast land for agriculture, it extended up to the seashore. But now the farmland is largely reduced due to prawn culture ponds. That is the main reason for the change of groundwater to more saline which considerably reduces the opportunity for agriculture”.

Gradual, continuous land degradation is the key driver of the changes in the cropping pattern. Till the 1980s, the cropping intensity and diversity were high, ensuring food and nutritional security of the local communities. Paddy was cultivated across all three seasons: kuruvai (June to August), samba (September to January) and thaladi (January to March), with diverse saline tolerant traditional varieties able to cope with the changes. Similarly, in drylands and homesteads, farmers grew vegetables, groundnut and millets throughout the year with a lean window of fallow during peak summer months of April and May. This system ensured the livelihoods of small farmers and agricultural labourers in the local region itself. However, in the two decades since 2000, a drastic change has been observed. In the majority of the cultivable land, only one crop of paddy in a year is cultivated. The samba season (September-January) is the only promising cropping season for farmers, as the area receives water from the Cauvery river in September and from the north-east monsoon from October to December. Only in the areas where groundwater is relatively better with medium salt content can farmers cultivate cotton, which can tolerate mild and moderate soil salinity, immediately after paddy. In recent years, some farmers have resorted to cultivating casuarina in drylands. The response from a focus group discussion (FGD) portrays the changes in cropping patterns.

‘Salinity is the main reason for changing our cropping pattern. We never planted cotton before; only after the salinity in our farmlands did we take it up. We used to cultivate paddy in all three seasons till two decades ago but now we cultivate paddy only in samba season.’

“For a few months, we do paddy cultivation. After harvesting, we won’t cultivate anything in the land as we don’t get water for cultivation in the next season.”

Paddy fields left fallow for more than two seasons, including those adjacent to shrimp farms, have been occupied by the invasive tree weed species Prosopis juliflora, making them uncultivable. As the cost of removal of Prosopis and restoration of land back to paddy cultivation involves huge capital and labour investments, the trade-off between these opportunities causes most of the farmers, especially men, to leave agriculture and move to non-farm sectors for employment in the nearby cities or seasonally migrate to far-off places depending upon opportunities and their skills. However, women are left with fewer opportunities to shift and continue to engage in farming, even though it is less productive.

The villagers expressed their deep concerns to prevent the degradation of agricultural soil and land further and willingness to restore the land for cultivation, inclinations which have increased since the COVID-19 pandemic. Restoration requires intensive political action by the government at various levels. Now, the study area in Sirkazhi block falls under the special agricultural zone identified by the Tamil Nadu government to protect the Cauvery delta region in a law enacted in 2020, the Tamil Nadu Protected Agricultural Zone Development Act, 2020. Farmers see that there will be scope to implement land restoration activities under this law and revive agriculture production. Under this law, the private company which purchased land from farmers can no longer start up and is therefore negotiating with villagers to sell the land for agriculture purposes. Out of 201.4 ha owned by the company, nearly 140.7 ha of land is unfit for immediate cultivation. Even with the phased purchase of the land by villagers, government intervention will be required to carry out the demolition of shrimp farm structures and preparation of soil and land for agriculture. Additionally, investments in water management structures are necessary to reduce the intensity of salinization. Appropriate measures to prevent seawater entry through canals are to be put in place with participation from local communities. These measures include renovating existing check dams, shutters, restoring water bodies to harvest surface runoff from rainfall, increasing the area under plantations, and promoting sand dunes in suitable sites. The study also identified that an area of 41.6 ha covered with Prosopis trees that can be restored to agriculture in the short and medium-term.

The recent announcement by the Tamil Nadu state government in August 2021 in the state policy on agriculture presented the target of increasing the amount of cultivatable land by restoring 1.18 million hectares of fallow land provides a positive and enabling environment for the restoration. The TIGR2ESS research team from Tamil Nadu has been engaging with the policymakers at the district and state levels to bring such changes.

This blog is written by Dr Pratheepa and Dr Rengalakshmi, working on FP1 at MSSRF, Tamil Nadu, India.

This article first published on https://tigr2ess.globalfood.cam.ac.uk/news/land-degradation-and-coastal-…