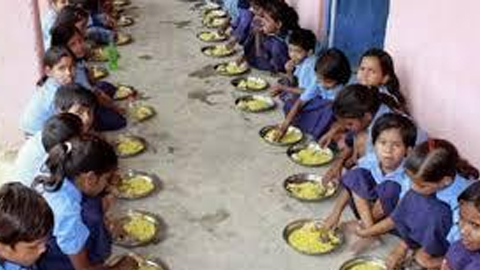 Chennai, January 17, 2016: On the occasion of the 100th birth anniversary of the late Shri M G Ramachandran, M S Swaminathan, Founder MSSRF recalls his association with him. This is especially in the context of the universal noon meal programme in government and government-aided schools in Tamil Nadu.

“Shri M G Ramachandran was deeply concerned with issues relating to education, nutrition and health of underprivileged children. During his second term in 1980-84, I was at the Union Planning Commission, first as Acting Deputy Chairman and later Member along with Dr Manmohan Singh, who served as Member – Secretary and Dr Mohammed Fazal, Member.  It was during that period that Dr MGR who was the CM of Tamil Nadu rang me up and wanted the Planning Commission’s approval for the universal noon meal programme in Government and Government Aided schools. I fixed up a meeting in the Planning Commission to discuss the proposal. He had told me that when he was young, he sometimes went to school hungry and on those dates could not concentrate on what the teacher was saying. He said as Chief Minister, he had an opportunity to ensure that all children are able to concentrate on study by providing adequate nutrition. I was very moved by his deep concern for equity in opportunities for children to study and specialise. The nutritious noon meal programme submitted by the Chief Minister was welcomed by the other members of the Planning Commission and was approved with great appreciation. Tamil Nadu became the first state for such a visionary intervention in the integration of nutrition and education. Subsequent studies have shown that student enrolment has gone up particularly from poorer families as a result of the noon-meal programme. In particular, more girls started coming to school because of this initiative. Many of the students who came out from such schools performed exceedingly well academically. Thus, MGR’s initiative conferred multiple benefits leading to education for all becoming a reality.”

On this day, MSSRF staff, scientists and scholars recall the contributions of a great leader towards equity in the state, especially for education of underprivileged.