Scope and recommendations for nutri-sensitive agriculture

India has the second-largest arable land area in the world with 140.1 million hectares of net sown area according to the 2017-2018 annual report of the Department of Agriculture, Ministry of Agriculture and Farmer Welfare. Yet, the biggest challenge is to ensure food and nutrition security for the mammoth population amidst natural and anthropogenic adversities. India ranks 101 out of 116 countries on the Global Hunger Index (GHI), and therefore needs to pay urgent attention since three out of the four components of GHI calculations are related to undernutrition.

Nutrition-Sensitive Agriculture (NSA) and nutrition literacy are considered key approaches to ensure the availability of diverse foods to the household. MSSRF – a spearhead in the field of NSA, was approached by the Japanese International Cooperation Agency (JICA) to study the critical entry points where nutritional goals can be incorporated into the existing agro-food systems in ongoing agriculture development projects. The project sites were: Andhra Pradesh Irrigation and Livelihood Improvement Project, Rengali Irrigation project (Odisha), Rajasthan Water Sector Livelihood Improvement Project, and Jharkhand Horticulture Intensification by Micro Drip Irrigation Project.

The goal was to explore agricultural systems, and practices to develop strategies to mainstream nutrition goals in the above mentioned projects. To identify the potential multiple pathways by which production systems can impact nutrition, a series of consultations were conducted with men and women farmers, village institutions, Krishi Vigyan Kendra’s (KVKs), line departments (agriculture, horticulture, women and child development, and health), as well as other stakeholders. Secondary data was also analysed to understand gaps and challenges.

Key findings from the MSSRF study in all projects showed agriculture was dominated by smallholders, and there was widespread malnutrition. Also, the lack of scientific farming practices was evident from the low productivity or high-yield gaps. Narrow on-farm crop diversity, low productivity of crops, fisheries, vegetable gardens and livestock, adoption of monocropping, long fallow periods, absence of value-addition activities, etc., were prevalent in all states. Backyard gardening was practiced in all states; however in Andhra Pradesh, both land area and diversity of crops are lower than the others.

In terms of nutritional status, all four states showed low staple food diversity. There is a surplus of calories, deficiency of protein, and lack of several micronutrients, specifically iron. Malnutrition is widespread among women aged 18-59 years due to inadequate nutrition intake and poor nutrition literacy. In all the states, almost 20 per cent of males and females were obese. Poor quality of water, inadequate sanitation facilities, and increased preference for junk foods among the younger generation were indirectly contributing to poor health. The common denominator of nutritional literacy is insufficient knowledge about healthy foods, and thus implementing NSA means improving nutritional literacy for better production-linked pathways to nutrition. 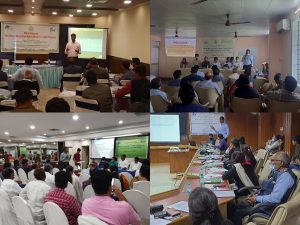 NSA interventions such as diversification and intensification of the cropping systems with a combination of cereals/millets, pulses and other crop types, also trees including biofortified crops were recommended. The intervention includes integrating allied enterprises like small animals, poultry, inland fishery as well. Participation in post-harvest value-addition activities, practising good agriculture methods for soil and plant health management including, crop rotation, cover crops were recommended to ensure the production of diverse food with desired nutrition. 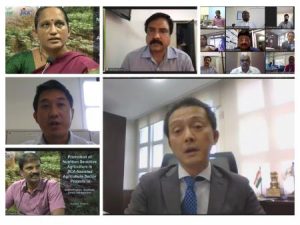 Findings and key recommendations were discussed with the associated stakeholders, and validated by including their perspectives and inputs through state-level workshops. The project concluded with a one-day National Virtual Consultation on NSA on March 10, 2022. Mr. Saito Mitsunori, Chief Representative, JICA India, and Dr. G.N. Hariharan, Executive Director – MSSRF, gave initial remarks about the project, Dr. Rengalakshmi, Director – Ecotechnology MSSRF, provided the prelude to the assessment, followed by a detailed presentation of the key findings by Dr. R. Gopinath, Senior Scientist MSSRF. There was a moderated open house discussion, and Mr. Akamine Kengo, Senior Representative – JICA India, gave the closing remarks.