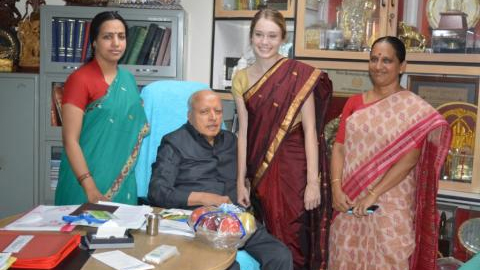 October 2017:  From Missouri in the United States to Chennai, Tamil Nadu, Sara Gammon, the 2017 Ruan-Borlaug Fellow has come a long way. The 18 year old was recently at MSSRF, to conduct research on the various models of dairy farming. Sara is a recipient of the prestigious World Food Prize Borlaug-Ruan Internship for students.

Her shy smile and quiet nature are deceptive because behind them is a deep thinker and an analytical mind.  She ventured with a clear and concise questionnaire for a visit to a women’s dairy collective in Redddiarchatram Block, in Dindigul, Tamil Nadu. However, she didn’t really use her questionnaire. In less than two weeks she became one of the women. They connected with her and told her all about their lives. From dressing like them to eating their food, she did everything that a girl from the locality might. However, with her specific purpose, she asked her required questions to the women, using the MSSRF staff as interpreters.

Sara conducted specific group discussions with the members and the non-members of the dairy collective. The members sell their milk to ABT, a conglomerate.  She found that the members receive more on average per litre than the non-members. Even so, one of the reasons, non-members stayed out of the programme was because they felt it to be too structured and required a lot of time and commitment from their side. She also spoke to the manager of the Pandyan Grammen Bank, the main bank loaning funds to the women and also visited ABT’s cooling centres, where milk that is brought is cooled and later processed.

From her research, she found that the women of the groups have become empowered and are now able to own savings and have a say in family expenses, which was earlier denied to them.

In order to compare the dairy models in Reddiarchatram with another model, she undertook a trip to Pillaiyarkuppam in Puducherry, where another women’s dairy collective exists. In Puducherry, the women collect the milk and sell it directly to consumers at collection centres. They receive income based on the quality of the milk they bring, measured by the fat content. She found the model giving them a better income and a steady livelihood.

For many of the Ruan-Borlaug interns, these internships are life changing. They get to see life from a whole new perspective- be it the culture, people or the place. Of course, it’s not just the interns whose life changes. The people they interact with also get a new perspective, so it is learning experience for all. Now, back home life may have returned to normal for Sara, but with it are a million memories to come back to.