A call to remember the forgotten crops – M.S. Swaminathan 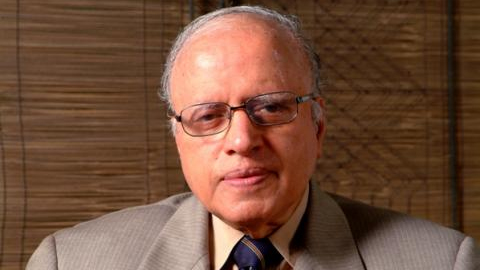 A call to rememberthe forgotten crops
CGIAR, the world’s largest agriculture research partnership, has reached $1 billion in funding, a
hugely important sign that the world is focusing on the importance of agricultural research.
However, there remains a great need to research the forgotten crops of the world. One of the
founders of the agricultural green revolution a generation ago is now calling for us to revitalize the
crops that revolution left behind. Prof. M S Swaminathan wants the UN to devote a year to the world’s “orphan crops” working with agricultural research organizations including Bioversity International.

Q: What do you mean by orphan crops?

A: They are the forgotten crops.  When we talk about food production and food security, we usually
think about just a handful of the main grains: wheat, rice and maize.  But there are a great many
more neglected and underused crops that are often more nutritious, and which grow better in many
places.  They could also help fight climate change, because they often need less water and tolerate
higher temperatures and droughts.

Q: Specifically, what crops are we talking about?

A:  There are plenty of other grains, like sorghum and millet in Africa and South Asia; quinoa in Latin
America; and tef, which is a favourite in Ethiopia.  There are also a huge number of almost forgotten
fruit, vegetable and tuber crops too.  Tubers like cassava and sweet potato are hugely important
survival crops for poor people in tropical countries, but terribly under‐researched.

There are breadfruits from the Pacific and many others that crop scientists and world food markets
have ignored for too long.  They come in endless varieties, many of which are grown only in a few
places but may have unique qualities the whole world could use.  We have sorghum varieties rich in
zinc; pearl millet rich in iron; yellow flesh potatoes rich in Vitamin A.  Many nutrition problems could
be solved with these orphan crops.  They are agricultural remedies for nutritional maladies.
We don’t need bio‐fortified GM crops like golden rice when we have all these naturally bio‐fortified
crops that do the same thing.

Q: Why have these crops got left behind?

A: They are disappearing because there is no international market for them, so nobody researches
them, so the yields are poor.  It is a vicious circle that we have to break.

In October I proposed at the UN’s Committee on Food Security in Rome that we have a year devoted
to promoting these crops, to try and revive interest in them by revitalising markets and research,
and the culinary traditions that use them.  I hope to get my country, India, and others to support the
idea.   I amconfidentit will happen, because everyone istalking about using agriculture to improve
nutrition.  These crops are the answer.

Q: So are you against GM crops?

No.  We need all the scientific tools to keep the world well fed.  Golden rice and other GM crops will
be part of that, I am sure.  But we don’t always need GM varieties when there are natural
alternatives already growing in fields.

Q: You were a pioneer of the green revolution to create high‐yield varieties of rice and other
mainstream crops.  Looking back, how do you balance the gains and losses from the green
revolution?  Do you regret how the revolution panned out?

The benefits far exceed the losses. Remember that 70 years ago, India experienced the great
Bengal famine, in which three million died.  This year India has four times as many people, but
the government has just passed legislation conferring the legal right to food. That transition has
few parallels in agricultural history.  And it could not have happened without the green
revolution.

But we have to do better.  Back in 1968, I warned that if all the locally adapted crop varieties
were replaced with one or two high yielding strains that could result in the spread of serious
diseases capable of wiping out entire crops and lead to agricultural and ecological disaster.
Today I think we still face that risk.

This is one reason why I emphasized the need for what I call a new “ever‐green revolution” with
crops that bring better nutrition, while needing less water and fewer chemicals and being
resilient to climate change.  It is the only way to bridge the needs of agriculture and conservation.
Orphan crops will be a big part of that revolution.  So will bringing back forgotten variety of the
mainstream crops.  I have been involved all my life in preserving the genetic diversity of food
crops of all sorts.  Forty years ago, I helped set up what became Bioversity International to do just
that.  That organization should be the technical arm of the year of orphan crops.

There is considerable genetic erosion still going on.  We preserve seeds for posterity in gene banks,
such as the secure vault in the ice on the island of Svalbard in the Arctic, but we need them in the
fields, too.  That means scientists working with farmers.  They are allies in the struggle for
sustainable food security.  But scientists have to be a bit humble, and realize that farmers are often
the real experts.

Q: A billion people go to bed hungry every night.  Why is this, when so much food is wasted?

Today nearly 1.3 billion tonnes of food is lost. We cannot afford to continue that way.  So the
problem is not just about producing enough food.  It is at least as much about access to food and
reducing poverty.

We have to work at both ends of the spectrum. On the one hand, we should promote an ever‐green
revolution to increase productivity of nutritious food that does not do ecological harm. That will mean usingmanymore orphan crops.  On the other hand, we have to increase the income of rural communities so they can buy food iftheir cropsfail.

The world can certainly feed nine billion people.  And feed them well, with more nutritious crops.