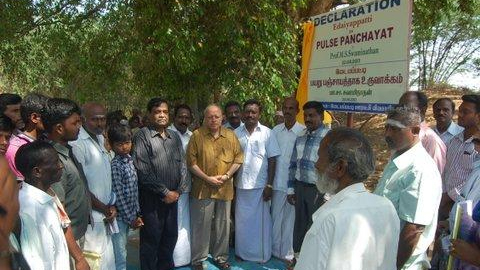 Chennai, April 19, 2016: We face three major challenges on the food security front. First, there is extensive poverty induced undernutrition. This can be overcome by implementing the provisions of the Food Security Act, 2013.  Second, there is widespread prevalence of protein hunger largely caused by the inadequate consumption of pulses. Finally, hidden hunger prevails due to the deficiency of micronutrients like iron, iodine, zinc, vitamin A, vitamin B12 etc. in the diet.  High priority should go to promoting balanced diets through attention to all these three forms of hunger. Food safety and drinking water security are equally important.

The year  2016 is the International Year of Pulses, but unfortunately the gap between demand and supply is growing and prices are rising. According to the latest report, the prices of pulses surged by about 34% in March. Although the government announces a reasonable minimum support price, there is no mechanism to implement it at the field level. Hence, both consumers and farmers suffer. Pulses are particularly grown in dry farming areas with minimum irrigation. They enrich soil fertility through biological nitrogen fixation. The National Pulses Mission for which funds have been provided in the 2016-17 budget should pay concurrent attention to the conservation of genetic resources, cultivation using organic farming methods, consumption and commerce. To promote group endeavour in water harvesting and pest management, Pulses Panchayats should be promoted. If such steps are not taken, the ruling high prices will neither help to alleviate protein hunger nor benefit the small farmers who toil sun and rain cultivating these protein rich crops. Let the International Pulses Year be a turning point in the history of pulses production and consumption in our country.