Archiving a legacy: agricultural history through the papers of Professor M S Swaminathan 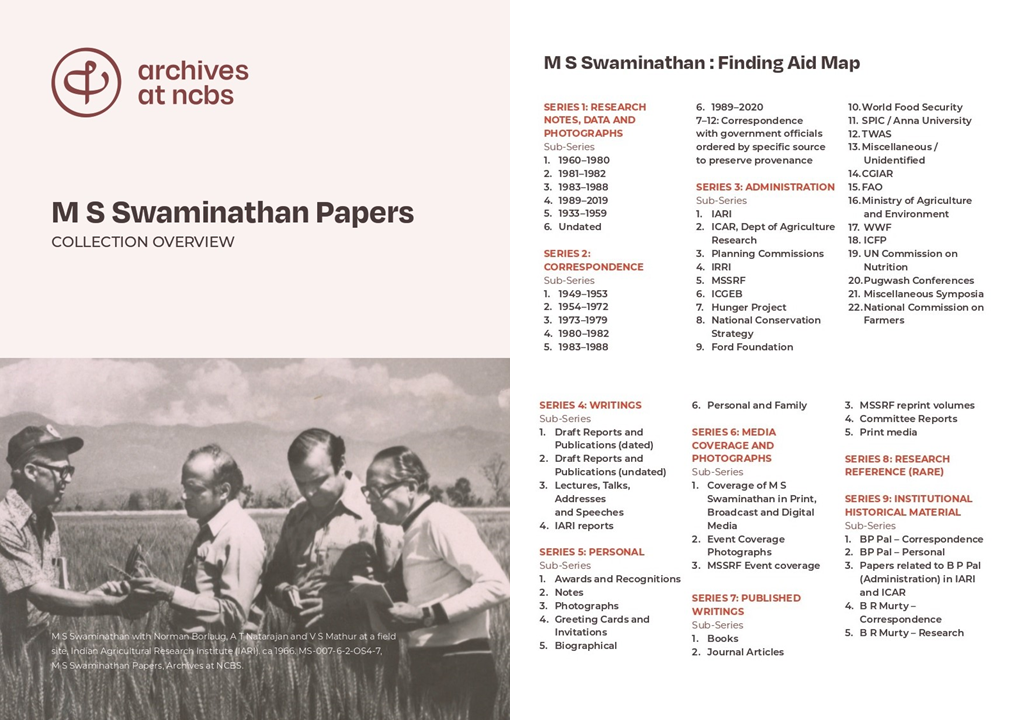 October 11, 2022, marked a consequential moment not just for agriculture and related sciences, but also for historical archiving in India and elsewhere.

The Archives at the National Center for Biological Sciences (NCBS) in Bangalore launched 48000+ archival objects spanning over 80 years of M S Swaminathan’s life and work at an in-person event attended by 100+ delegates and students. Dignitaries including Prof K VijayRaghavan, Former Principal Scientific Adviser to the Government of India, Dr Ashok Kumar Singh, Director ICAR-Indian Agricultural Research Institute, and Mr N Ram, Director of The Hindu Group Publishing Pvt Ltd, spoke about the role of M S Swaminathan (MSS) as a plant geneticist, as an agricultural scientist, a humanitarian, a communicator and as an institution builder.

The importance of archiving at NCBS was brought out by the Director, Prof Satyajit Mayor in his introduction. Dr Madhura Swaminathan, Chairperson M S Swaminathan Research Foundation (MSSRF), acknowledged the significance of archiving agricultural history for further research and societal understanding, and spoke on the how the Trustees decided to handover the MSS papers to NCBS.

Dr VijayRaghavan noted that Swaminathan, unlike many others, was able to link science to society. He lauded the launch of this comprehensive collection of archival material from research notes to media clippings, to correspondence, published works and photographs over eight decades of his life.

Dr A K Singh offered a glimpse into the Green Revolution and its implications for people’s access to food, to public policy, from the change in the name to Ministry of Agriculture and Farmers Welfare to the enactment of the National Food Security Act.

Crediting Swaminathan with the green revolution and work in-progress on the ‘evergreen revolution’, Mr Ram described Swaminathan as a “persuasive communicator” with exceptional talent in responding to the media. “There is much to learn from MSS,” he stated, “on how a scientist responds with integrity, in a scientific way.”

Dr R D Iyer recalled several episodes from the time when his thesis was prepared under the guidance of Swaminanthan. 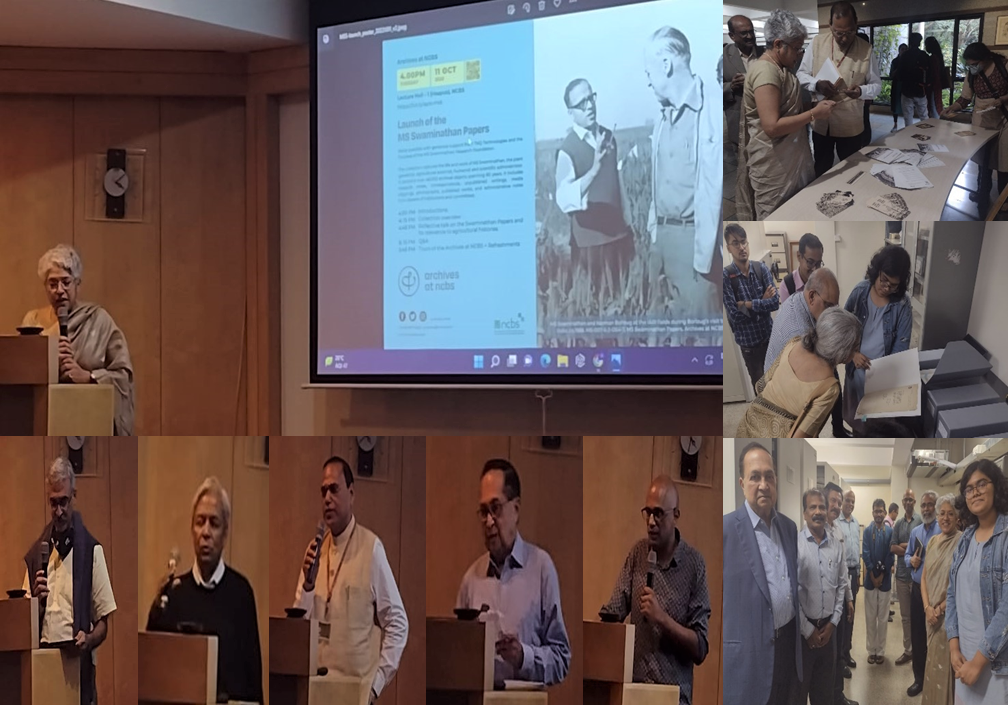 Mr Venkat Srinivasan of the Archives at NCBS provided a peep in to the rich material of the archive with illustrations from different sections of the material. He noted that Swaminathan is the proto-archivist, and credited Dr Parasuraman of MSSRF for his painstaking efforts in preserving this material for future generations. At NCBS, a variety of archivists and student interns worked over the last two years to catalogue and prepare the material. They were led by Sangeeta D (ex MSSRF), Ravi KB, Sanjna GY, and Soumya S, and supported by Swathi S, Malavika A and Niranjana K.

About the M S Swaminathan Papers

The MSS Papers are now housed at the Archives at NCBS, a public collecting centre for the history of science in contemporary India, and are organised across two distinct accession groups and nine series. These are in the form of research notes, correspondence, unpublished writings, media clippings, photographs, published works, and administrative notes from dozens of institutions and committees, and with material dating back to the early 1930s. Material is arranged in adherence to international archival description standards, and in ways that preserve original order and provenance to the extent possible.

Series 1 contains research notes, data and photographs beginning from 1933; Series 2 has correspondence from 1949 to 2020, also correspondence with government officials. Series 3 is titled ‘Administration’ and covers government, national and international agencies, including the National Commission on Farmers and the UN Commission on Nutrition; while sub-series of Series 4 holds all writings ranging from draft reports and publications to IARI reports. Awards and recognitions, biographical and family are featured in Series 5 as ‘Personal’, and Series 6 is a collection of media articles and press photos. Published Writings are found in Series 7 and Research Reference is in Series 8. The last is Series 9 that has all the institutional historical material from B P Pal to B R Murthy in ICAR-IARI.

The collection is available for public research and requests. Refer the guide for access to the collection, and to view the full catalogue, proceed to the Archives collections page. Material in the collection, created before 1992 is open to the public as of 2022, but material relating to administration and correspondence created after 1992 may carry restrictions.

Donors: This collection is made possible with generous support from TNQ Technologies and the Trustees of MSSRF.

The Archives at NCBS

The 2000-square-feet physical centre of the Archives at NCBS includes space for research, processing, exhibitions, recording, and a leading-edge storage facility with monitors for temperature, light, humidity, air quality, water, fire, pests, and noise. There are over 150,000 processed objects across 25 collections are in various forms, ranging from paper-based manuscripts to negatives to photographs, books, fine art, audio recordings, scientific equipment, letters, and field and lab notes.