Beyond books, it’s health too in MSSRF’s library 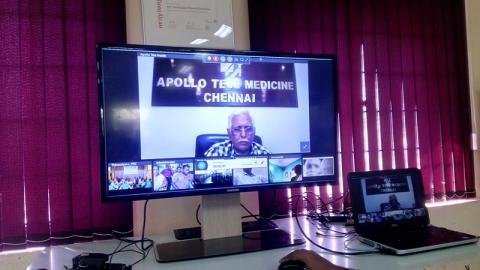 To broaden its services the MSSRF Bhoothalingam library began tele-health awareness along with Apollo Hospitals, Chennai, on February 28, 2017. This effort aimed to spread awareness among communities on health-related issues, particularly in Tamil Nadu and Puducherry. The first session dealt with Psychiatry and Psychological issues, with advice from Dr V. Muthukrishnan, Chief Psychiatrist, Apollo Hospitals.

MSSRF in relation with the International Network of Emerging Library Innovators (INELI) and the Indian Public Library Movement (IPLM) has been involved in capacity building of librarians and aims to introduce innovative services at public libraries. MSSRF has an institutional partnership with Apollo hospitals, under its CSR, to organize such education sessions every fortnight. In every session, 10 libraries participate. Librarians in those libraries encourage their community to bring their health education requirements and clarify doubts.

Mr Jankiraman, the MSSRF librarian and an INELI innovator, facilitated the session based on the expert availability. The session ranged for one hour with initial presentation by the doctor, followed by question and answer sessions where people raise queries on the topic. A total of 10 public libraries were part of this event. More such sessions are expected to be conducted in a similar format.

Earlier in the day, MSSRF signed an MoU with IPLM and the NASSCOM foundation for an initiative to strengthen the capacity of public libraries over a two-year period. This initiative re-emphasizes a movement towards strengthening libraries and constantly re-inventing them to be relevant.