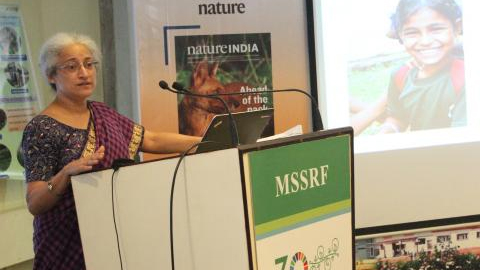 Chennai, March 09, 2020: Be it man or a woman, breaking stereotypes on both sides is important to achieve gender equality said Dr Nitya Rao, Professor, Gender and Development, University of Anglia. Speaking at a seminar to commemorate International Women’s Day, at MSSRF today, Dr Rao focused on the UN theme for this year ‘I am generation equality – realizing women’s rights’.

Recognizing the intellectual contribution of women, beyond labour, Dr Nitya Rao said, was important, given their tremendous knowledge in fields like agriculture. “Even now, only 4 per cent of the women hold Kisan Credit Cards while the data shows that 60 per cent are women in agriculture in India. We need to break the stereotypes about participation of both men and women to progress towards economic and human development of our country”, she said.

Dr Nitya Rao, took a holistic approach to connect science, sustainability and social justice speaking of how women play an equal role in it and how it is being recognised worldwide. She quoted examples of how women faced struggles to be recognised for their work in science. Even Nobel Laureate Dr CV Raman showed bias when Dr Kamala Sohonie, the first Indian woman to later get a PhD in scientific discipline, applied to do research with him. She was initially rejected but responded with a satyagraha outside persuading him to grant admission.

Speaking of the differences between men and women scientists, she said “Many great women scientists are still remembered now not only for their contribution in science, but how did they saw science with humanity. Janaki Ammal, a great Indian botanist who conducted scientific research in cytogenetics and phytogeography is remembered for fighting for the rights of the tribal people who stood up for protection of their environment and ecology,” she said. The Sustainable Development Goals categorised in three dimensions of economic, social and environmental benefits, need also have the ethical dimension shown explicitly, she said.

Prof Swaminathan in his concluding remarks reminded the audience of the importance of reinforcing legal rights of women. A Bill in Parliament on ‘Women Farmers’ Entitlement Bill’ had been introduced by him in the Rajya Sabha when he was a member. “Unfortunately it could not be taken up for discussion, as these days, there are more disruptions than discussions. I hope before the next International Women’s Day this Bill might be taken up for discussion and something is done to reinforce women’s legal rights”.

MSSRF has been working on gender equality since 1992 said Dr R Rengalakshmi, Director Ecotechnology, MSSRF and that Gender was one of the cross-cutting themes to work towards the UN Sustainable Development Goals.