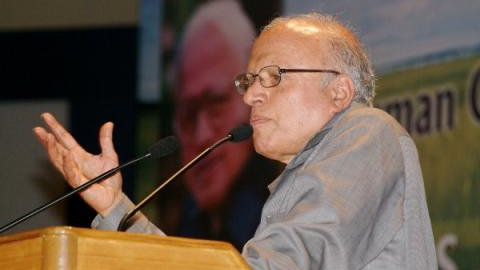 Inauguration of the 100th Foundation Course of Agricultural Research Service

Breeding Brains for a Hunger-free India

I was here when the first course was inaugurated for ARS probationers and I am indeed really fortunate to be here when the 100th course is being launched.  To me this is almost a dream come true.  One of the first tasks I wanted to accomplish when I became DG of ICAR and Secretary to Government of India in January 1972 was to revamp and restructure the personnel policies for scientists and technical workers.  I conducted a detailed malady – remedy analysis to identify the deficiencies in the then prevailing system and proposed remedial measures.  The first thing I noticed was that the earlier system was a post-centred system with recurrent unhealthy competition among fellow scientists for the same position.  I wanted to replace it with a scientist-centred system where there will be no mutual competition for posts among fellow scientists. The aim is to provide every scientist with an opportunity for both professional growth and financial advancement.  The scientist-centred system also helped in directing attention from purely physical infrastructure to the intellectual infrastructure.  In other words, the emphasis on bricks gave way to an emphasis on brains.

In order to accomplish such a radical change in the personnel policies, I went to every ICAR institution and held staff meetings. I requested the staff themselves to identify and articulate the strengths and weaknesses of the then prevailing system.  It is on the basis of such extensive consultations, I prepared the structure for an Agricultural Research Service (ARS) of ICAR.  It was however not easy to get the Cabinet approval for such a radical restructuring of the administrative and recruitment policies of ICAR.  There was opposition on various grounds such as the need to get the approval of State Governments before starting ARS.  Also there was a feeling that ARS will tend to promote generalists than specialists.  All these apprehensions were addressed and thanks to the support of Smt Indira Gandhi, the then Prime Minister of India, the ARS proposal was approved by the Cabinet of India.  I am aware that through the years some changes have been made which sometimes tend to undermine the basic philosophy and purpose of ARS.  The ARS was designed to allow every scientist to grow professionally and get higher emoluments whether or not there were vacancies.  You all know the current strengths and weakness of this system and you should try to maximize its strengths and eliminate its weaknesses.  Our aim should be to provide a personnel policy which will promote the growth of a dedicated and capable band of scientists in various fields of agriculture, all committed to the cause of sustainable food security and agrarian prosperity.

Recently, I had the opportunity to address the Agricultural Scientists’ Recruitment Board (ASRB) which is one of the vital organs of the restructured personnel policies.  I suggested to them to consider introducing sub-cadres in ARS.  The first is for dealing with the special requirement of the North-Eastern part of our country.  The second is for introducing a cadre for International Service.  ICAR is being increasingly called upon to help other developing countries.  For example the Government of India is helping the Government of Afghanistan to organize an Agricultural University at the Tarnak Farm in Kandahar.  Our Government is also assisting in setting up a Genetic Garden of Afghanistan at Kandahar.  Similarly, GoI is helping Government of Myanmar in establishing an Advanced Centre for Agricultural Research and Education as well as a Rice BioPark at Ney Pei Taw.  All this requires specially qualified scientists who will be able to help effectively other developing countries.  The time has come for ICAR to establish an International Agricultural Research Service sub-cadre of the ARS.

In 1968, when I was Director of IARI, I was already working on a method of overcoming the deficiencies in our personnel policies through the establishment of Agricultural Research Service.  There was obviously a need for a human resource development Institution for ARS probationers.  My aim was to have an Academy similar to the one in Mussorrie for IAS probationers.  I started in a small way a Central Staff College for Agriculture at IARI.  This is what has grown into NAARM over the years.  I must recall with gratitude the help of Dr K Kanungo who was then the Head of the Division of Economics at IARI for his invaluable suggestions.  The other key contribution was by Dr Ananta Rao, the first Director of NAARM.  Later at the suggestion of Dr G Rangaswamy the name of the Staff College was changed to NAARM.  I congratulate and thank all the past and present Directors for making NAARM a really valuable instrument for promoting a culture of scientific excellence and social commitment.

While establishing the Central Staff College of Agriculture at Hyderabad (NAARM), my aim was to provide opportunities for life long education and intellectual growth among ARS scientists.  The Trombay School set up by Dr Homi Bhabha at Mumbai and the National Defense College at Delhi were used as desirable models.  When the Kothari Commission on Education was finalizing its report, we (Dr B P Pal and me) requested Prof Kothari to title the agricultural chapter as “education for agriculture”, and “not agricultural education”.  The reason was that every scholar in our country should have some exposure to the basic facts of rural life which revolve around crop and animal husbandary, forestry, agroforestry and capture and culture fishery and agribusiness and agroprocessing.  When I set up the ARS and launched with the help of Dr M L Sahare, a global search for capable candidates I knew that not all the applicants will have degrees from Agricultural Universities or Colleges.  In fact I was the first Director of IARI who had an agricultural education.  This is why I wanted NAARM to become a Centre of  Education for Agriculture.  Also for success in any project, we need to attend to three M-s namely, management which helps to bring the best among staff members, monitoring which helps to introduce mid-course corrections when necessary, and finally measurement of impact.  All these three aspects are important for the successful implementation of any multidisciplinary project.

In the early years, I had wanted ARS entrants to spend one season (rabi or kharif) with a good farm or fisher family or a non-government organization in order to understand the practical problems faced by our farm families.  I also wanted that the courses should be engendered, so that the critical role of farm women in every aspect of production and post harvest technology gets recognized for appropriate scientific and extension attention.

The country needs urgently visionary young scientists who cannot only help to solve the problems of today, but importantly the problems of tomorrow caused by climate change and demographic pressures.  I hope in this 100th course you will master the pathways by which we can overcome current and future problems.  We have to provide an income and ecological orientation to farm technologies.  Over 60% of the population now contribute hardly 14% of GDP.  If this situation either persists or gets worse, we will find that rural poverty will increase; social unrest will also increase.  Therefore a very heavy responsibility rests on your shoulders.  If our country chooses gross national happiness as the measurement of progress in development, as Bhutan has done, then agriculture is the pathway.  I wish you much success in enjoying the happiness which will come from meeting the zero hunger challenge launched by the UN.  Also this year is the International Year of Family Farming.  You must try your best to help our farm and fisher families to enjoy sustainable livelihoods and sustainable income and work security.  I wish you much success in helping our country to meet these challenges. I once again congratulate the past and present Directors, faculty of NAARM for enabling NAARM to become the flagship of our efforts in human resource development for agriculture.  Above all, I congratulate and thank Dr S Ayyappan for the visionary leadership he is providing to the organization.  If agriculture goes wrong, nothing else will have a chance to go right. NAARM has to play an important role in safeguarding and strengthening our agricultural future.