Celebration on the achievements of Professor Staffan Lindberg; A memorial tribute paid by eminent scholars 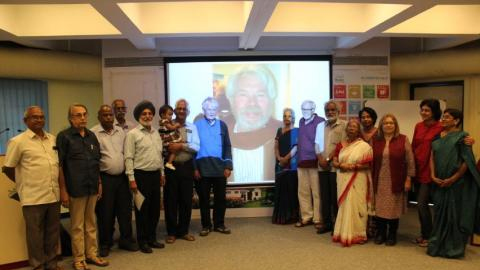 Chennai, January 31, 2019: A memorial tribute was paid today to the profound sociologist Professor Staffan Lindberg at M S Swaminathan Research Foundation, Chennai. Many eminent scholars who have contributed towards the development of rural India participated in the memorial meeting and remembered the remarkable work of the Swedish sociologist.  Prof. Lindberg had worked for over five decades on rural India, focussing in particular on rural Tamil Nadu.

The Chairperson of Kasturi & Sons Mr N Ram recalled that when Prof Staffan carried out research in rural development at the PSG College of Arts and Science, Coimbatore, he surveyed 415 dalit households as a single handed research fellow. The most memorable one was when there was a drought in their field area in Tamil Nadu in 1969, Staffan’s research group were unable to see the suffering of the people and decided to give up their research and started distributing all the funds they received for their research to alleviate the suffering, but fortunately the area received rains and they were able to continue the research. He said that the decision they made is a clear sacrifice which is a hard choice, and that sets Staffan apart from most researchers with strong moral sense apart from the progressive values with which he has influenced and mentored many students over the decades.

Dr. Lars Eklund, formerly Deputy Director, Swedish South Asian Studies Network (SASNET), Lund, Sweden was associated with Staffan working together for nearly 40 years. He remembered how they developed SASNET, and said “It was Staffan’s thoughts not to let the network mainly consist of a physical centre formation in Lund, but instead to build on and develop the overall South Asian competence”. He also shared his experience on writing the book “the Miracle India and its backside” with Staffan and other talented writers. He has also written a tribute about Prof Stafffan, noting the work they did together.

Professor Sucha Singh Gill from the Centre for Research in Rural and Industrial Development, Chandigarh shared his experience with Professor Staffan on how he came to Chandigarh in June 2003 during a very hot weather condition to do research on agrarian structure and farmers’ movement in the state in rural areas, that shows the dedication towards his work. He said “we started calling Staffan as ‘Staffan Singh’ because there is a tradition in Punjab that when a person is very close we exchange the turbans and that was the same which happened between us”. He also recalled how Staffan had a great interest in the social and farmer movements in India. Professor Dipak Malik from the Centre for the Study of Indian Languages and Society (INLANSO), Varanasi said that two of Staffan’s qualities were his deep human empathy and his scientific research.

Economist Prof. Venkatesh Athreya who organised this meet said “Professor Staffan began his work as a sociologist more than four decades ago in 1978, but his involvement with India started much earlier. He first came to India and Tamil Nadu in the 1960s. Later, Professor Goran Djurfeldt and he collaborated while being doctoral students in Sociology at Lund, writing two important monographs, ‘Behind Poverty’ and ‘Pills against Poverty’. The former was a study of the social formation of the village of Thaiyur near Chennai from a broadly Marxist perspective. The latter was a spin-off from their study, as sociologists/social anthropologists, of the practice of medicine in the village. Staffan, Göran and I came together (along with another researcher Gustav Boklin who was with the project for some time) in 1978 to carry out a research project that sought to address the then raging debates on the mode of production in Indian agriculture by conducting a serious empirical study of a sample of six villages in the then Tiruchirappalli district of Tamil Nadu from a Marxist perspective. The results of that collaboration before the age of the Internet included a number of scholarly articles and finally a book entitled ‘Barriers Broken’ published by SAGE in 1990”.

The eminent scholars who had worked with him and who attended the meet spoke about his deep human empathy and his hard work in the area of social movements of the peasantry and how he combined his empirical research work with a lot of empathy.

The meeting was also an occasion to celebrate his achievements as both scholar and activist with outstanding contributions to the study of rural India and to the promotion of research collaboration and networking among Swedish and South Asian scholars in the social sciences. Professor Lindberg first came to Tamil Nadu in 1966 to study Tamil at Annamalai University. Since then, and till the end, he remained both a fine scholar of rural India and a great friend of India.Professor Lindberg, an Emeritus Professor at the Department of Sociology at the University of Lund at the time of his passing away on January 7, 2019, was also an able administrator, having served with distinction as the Founder-Director of the Swedish South Asian Studies Network (SASNET).

The speakers at the Memorial meeting for Prof Lindberg were: