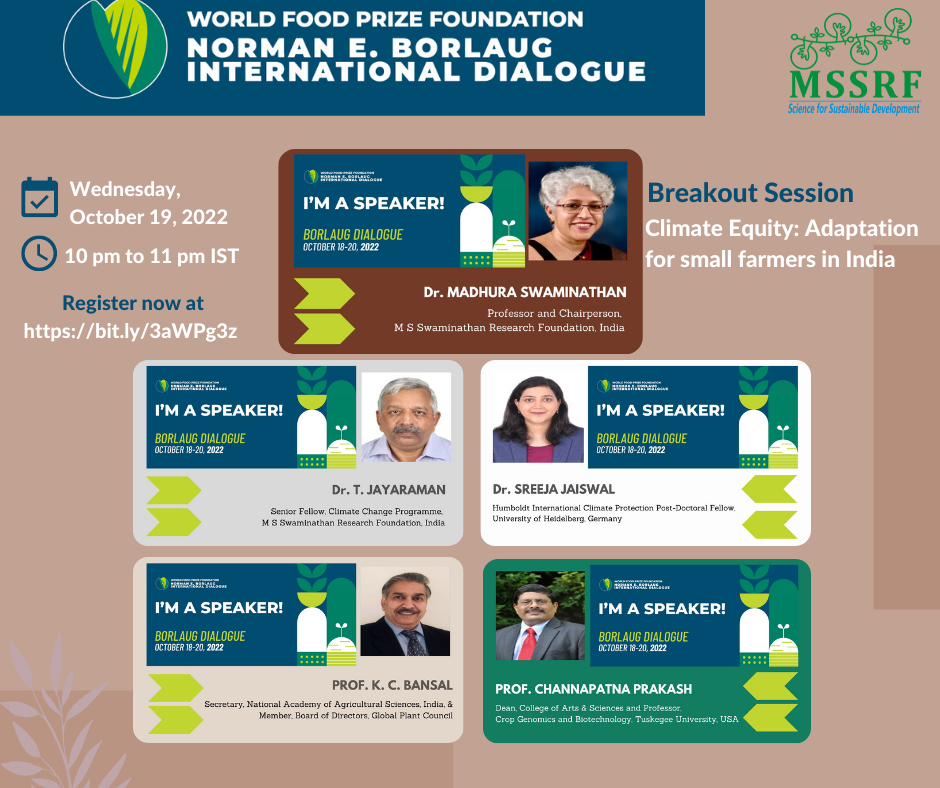 This breakout session, hosted by the M S Swaminathan Research Foundation (MSSRF), brought together five experts in the agricultural industry to explore the importance of small farmers in India and the role climate equity plays in their communities.

To start the conversation, Dr. Madhura Swaminathan, chairperson of MSSRF, shared with the audience information about farmers in India, noting that although there are a significant number of farmers, those with less than 1 hectare of land have a monthly income of $117/month. 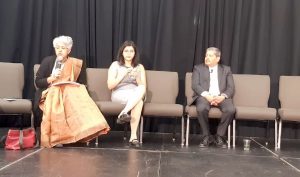 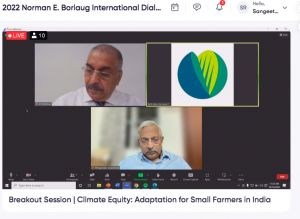 This conversation turned to Dr. T. Jayaraman, senior fellow at MSSRF, who provided context of how to look at climate equity. His presentation started by outlining the dimensions of climate equity: emissions and climate action, equitable and fair access to the global carbon budget, adaptation vs mitigation, and enhancing productivity of India’s food security.

Jayaraman emphasized the inequity that exists between different regions around the world by comparing historical cumulative CO2 emissions. He noted that South Asia was in the bottom three of CO2 emissions, at 4 percent of total global emissions. North America and Europe, however, were the top two, emitting 23 percent and 16 percent of the world’s CO2 emissions, respectively.

Dr. Sreeja Jaiswal, senior economist at MSSRF, emphasized that countries must balance their strategies to include adaptation and mitigation according to their national, regional, and local circumstances. This requires an integrated approach to adaptation, rather than depending on one singular viewpoint.

To follow, Dr. Channapatna Prakash, dean of the College of Arts and Sciences at Tuskegee University, described the role of genetic technology in enhancing climate resilience, stating that “increasingly, climate-resilient crops will depend on using new tools to make them even more productive.”

Dr. KC Bansal, secretary of National Academy of Agricultural Sciences in India, discussed the importance of a “triple win strategy [that includes] higher yields, more carbon sequestration, and greater resilience to heat and drought.” Prakash followed this by discussing the role of climate resilient crops that depend on using new tools to make them even more productive.

Through their discussion of firsthand experiences with the MSSRF, the panel of leaders underlined the importance of continuing these conversations on climate equity, technology, adaptation for small farmers in India. As Dr. Swaminathan shared to close the session, “we have to use the latest science, technology, and innovation to meet the triple challenge of productivity, adaptation, and sustainability of the climate.”