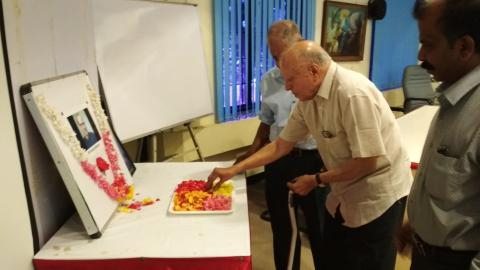 January 18, 2018:  A condolence meeting was held for noted journalist and playwright Gnani Sankaran at MSSRF today.  Gnani’s association with the Foundation goes a long way and he had created videos associated with children and women’s rights and for gender equality.

Dr A Sarvesan, General Manager, Strides Shasun Ltd, spoke about Gnani’s down to earth qualities who treated everyone equally. He also spoke about the quality of Gnani’s work that remains relevant many years after. Gnani always agreed on the core issues affecting society, he said.

Gnani’s two sisters, Gayathri Vaidyanathan and Subadra Rajagopal were present on the occasion and spoke fondly about their relationship with their brother.

Prof M S Swaminathan, Founder MSSRF, thanked the audience for the tributes made to Gnani, and spoke of how he became associated with him through the work of his wife Mrs Mina Swaminathan. He praised Gnani for his objectivity of thought, integrity and originality and how he had gained from his critical ideas of the Foundation’s work.

A series of short films shot by Gnani were screened at the meeting. Staff and members of the audience also paid floral tributes to the late journalist. As Prof Swaminathan said, Gnani lived up to his name, remained a fountain of knowledge and all should strive to follow his originality and integrity.