Congrats to The Hindu on completing 140 years of journalistic excellence and social relevance: M S Swaminathan 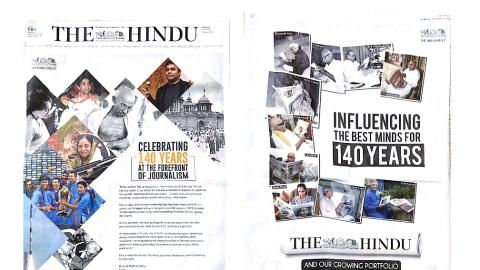 Chennai, September 20, 2018: On The Hindu newspaper’s completion of 140 years in existence, Professor MS Swaminathan congratules its management for the daily’s excellence and diligence. MSSRF has always been supported by The Hindu, and the group’s Chairman Shri N Ram; the Hindu Media Resource Centre of MSSRF was established by The Hindu for interaction between scientists and journalists.

Here is what Professor Swaminathan said on the occasion marking 140 years of The Hindu:

Today (20 September, 2018) ‘The Hindu’ is completing 140 years of remarkable service to the public, political and the media world. From 1895 the Hindu has been owned by Shri S Kasturi Ranga Iyengar (late) and subsequently by the members of his family. Today Shri N Ram serves as the Chairman of Kasturi and Sons Limited and Publisher of the Hindu.

I have been reading the Hindu as soon as I get up in the morning during the last 70 years. A remarkable feature of this unique newspaper is the attention paid to accuracy of facts and impartiality of coverage. The Hindu is also the first newspaper to have a full-time agriculture correspondent and was gracious to establish at MSSRF, Chennai a Media Resource Centre for interaction between scientists and journalists.

The Hindu has also been giving emphasis to public health issues and to secular democratic values. It is also the one newspaper which combines the classic and the contemporary in journalism. It has been the flagship of trustworthy journalism and has not tried to glamorise serious issues of public importance. Because of its ethical standards both the public and different political parties respect the contents and views of this precious jewel in the crown of Indian journalism.

As one who has benefited immensely from regularly reading the Hindu I can say without hesitation that The Hindu has given prestige to journalism as an important component of our political freedom, religious harmony and scientific and economic progress. I would like to express our gratitude to Shri N Ram and his colleagues for maintaining and promoting a newspaper of The Hindu’s journalistic excellence and social relevance.