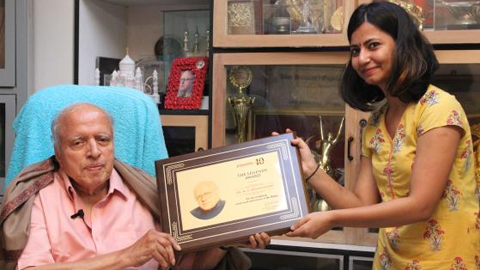 Speaking on the occasion, Professor Swaminathan said, “Corporates can play a role in helping make farming economically viable for small and marginal farmers. They can set up bio-parks for food processing and value addition of agricultural products as well as to market the products profitably.”

Professor mentioned the example of the Rice Bio-park in Yezin, Nay Pyi Taw, Myanmar, which was set up with support from the Government of India on his advice. The rice bio-park is involved in the preparation and marketing of value-added products from rice bio-mass consisting of straw, bran, husk and grain. It helped shift the paradigm from paddy farming being linked to poverty to it being associated with prosperity.

Elaborating on further roles CSR initiatives can play, Professor said corporates can provide technology resources and involve themselves in knowledge transfer to the community. MS Swaminathan Research Foundation runs Village Knowledge Centres in several places in Tamil Nadu where capacity building is carried out and know-how is disseminated. Such initiatives go a long way in empowering a community through knowledge.

The Fisher Friend Mobile Application used in several areas where MSSRF has made interventions, for example, provides GPS-enabled accurate data to fishermen on where to find fish resources, where the International Maritime Boundary Line is, and alerts on weather, among other things. Collaborations to develop such technology can be enabled by CSR initiatives.

Most importantly, CSR initiatives must develop programmes to empower women and children of the farming community. “Women do more than 50 per cent of the farm work,” pointed out Professor Swaminathan, but they are not considered farmers and therefore not taught knowhow.

Spreading awareness is another key area for CSR initiatives. If, say, farmers were made aware about the World Trade Organisations rules, their farming practices could be altered accordingly.

Professor emphasised that it is the synergy between the public, private and cooperative sectors, such as the Amul milk cooperative in Gujarat, that empower farmers by making farming economically viable for those of the community.

(Professor M S Swaminathan receives the award given by Fiinovations, at Chennai on Thursday, September 27, 2018.)