Development must be sustainable and equitable at its core: M S Swaminathan 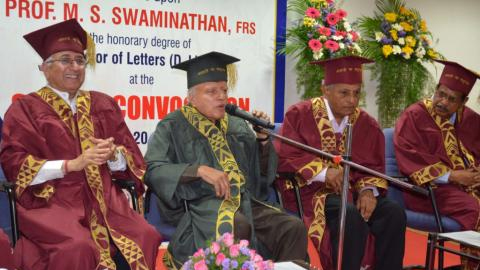 In his acceptance speech, Professor Swaminathan expressed happiness that ITM University had produced 1,000 agricultural degree holders and said it was important that the core of that learning include the dimensions of equity and ethics.

Speaking of equity, the Professor mentioned the example of Switzerland as one to emulate. The Switzerland government’s Patents’ Trust had bought the patent for the golden rice variety and distributed it free of cost or at a nominal charge to developing countries. “It is a model to be emulated, as development must reach everyone,” he said.

Echoing the professor’s words, Dr T Ramasami, Former Secretary, Department of Science and Technology (DST), Government of India, said, “Science needs to deliver value to the people”. Stating that the work of scientists could be classified into three—passion driven, power driven and people centric, he extolled the people-centric science that professor Swaminathan and his foundation has practiced throughout the decades.

Recalling how the Department of Science and Technology of the Indian government came into existence only after the success of the green revolution, Dr Ramasami praised Professor Swaminathan as not just a great scientist but a great statesman who connected research and development with the farm.

Quoting former President Abdul Kalam, he said, “A dream is not the thing you see in your sleep but is that thing that doesn’t let you sleep,” and added, “We must look at M S Swaminathan as a role model to emulate and jot just as an icon.”

Dr Kamal Kant Dwivedi, vice-chancellor of ITM University, who presented the degree and the citation to Professor Swaminathan called him “one of the living legendary scientists of the world and an acclaimed father of economic ecology, who propagated the novel idea of non-violence to nature.” He said he was honoured to present the degree to the professor who already holds as many as 83 honoris causa degrees, of which 24 are from international institutions.