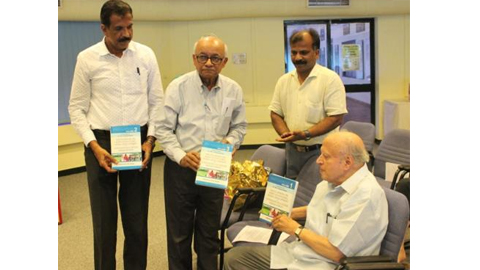 Chennai, February 18, 2019: A three volume set of encyclopedia covering three core areas, Agro-Ecosystems, Rural Development and Education Extension authored by Prof Debabrata Dasgupta was released by Prof MS Swaminathan, founder of MS Swaminathan Research Foundation at the premises of MSSRF, who has written the foreword for all the three volumes. The book is published by Jodhpur, Rajasthan-based publisher, AGROBIOS (India).

Professor Debabrata Dasgupta is highly acclaimed for his work in extension education in agriculture. He was the former Vice Chancellor of Bidhan Chandra Krishi Vishwa Vidyalaya in West Bengal and Retired Professor of Visva-Bharati University in Santiniketan. Prof Dasgupta said that he conceived the idea of compilation of the content on the three overlapping themes when he was engaged in teaching, research and extension activities in the 1960s and this idea gained momentum in the 1980s, when he began supervision of doctoral students of various fields in agriculture. Prof Dasgupta has spent 7 to 8 years on compiling the encyclopedia from various sources such as Encyclopedia Britannica, Encyclopedia Americana, Handbook of Agriculture and Animal Husbandry respectively of ICAR and Manorama Year Books, among others.

With the first part of the encyclopedia being for usual readers and the later sections meant for the advanced readers the sections are arranged alphabetically with the agro-ecosystem section consisting over 55 topics, the rural development section covering over 100 topics and the extension and education management section consisting over 70 topics. The relevant facts that were not written in the main part of the book are covered in the appendix which consist over 50 topics.

Prof Swaminathan, while congratulating Prof Dasgupta on his extensive effort said, “He has done a great service of bringing together so much information in one place”. Dr Anil Kumar, Executive Director MSSRF, while also commending Prof Dasgupta on his work, said “in this day of the internet, where people can get lost with information, this compilation will really help the readers.”

Students, researchers, media and staff of MSSRF attended the programme.