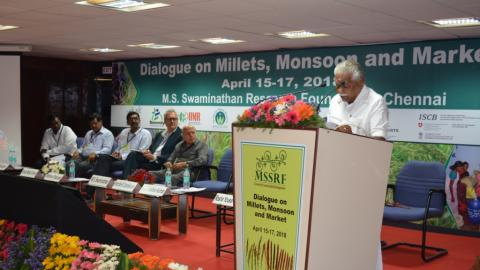 Chennai, April 15, 2018: Millets, is an important crop for our current times, growing under extreme climatic conditions, while also providing nutrition for humans and fodder for animals, said Thiru Dorraikannu, Hon’able Minister for Agriculture, Government of Tamil Nadu at the Millet, Monsoon and Market Dialogue held today.

While stating that millets comprised 12% of the cultivated area as part of the Special Project on Rainfed area development programme in Tamil Nadu, the Govt of TN has allocated Rs. 802 crores for the promotion of millets during 2016-17 and 100 crores in 2019-20 for the promotion of livelihood opportunities under millets.  Tamil Nadu is a leader in the country in manufacturing, processing mills especially, in Salem and Coimbatore districts.

He said that Government and NGO should work together for the promotion of nutria-millets. The Minister inaugurated the Millet exhibition.

Prof Swaminathan, Founder MSSRF stated the important role of women in agriculture, as farming owes its beginning to them. He mentioned also how traditionally, a variety of crops were used for cultivation for both food and fodder, which have been lost due to modern practices and also how we need to promote a variety of germplasms in this era of climate change.

He emphasized a combination of farmer driven technology and public policy for agriculture and an attractive pricing policy to retain the youth in farming, along with diversification of crops. He said the present dialogue should lead to concrete action around millets in the noon-meal and food-for-work programmes and also in the PDS. He also emphasized the need for food processing industries to involve in millet products and for chefs to bring in new recipes on millets.

Dr N K Krishna Kumar, Regional Representative –South and Central Asia, Bioversity International, spoke of how in Karnataka, the culture and identity was closely linked to the ragi crop and the need to preserve it. While highlighting about millets being climate smart crop, Dr Krishna Kumar emphasized the need to study the impact of climate change on the NE monsoon as Tamil Nadu is more dependent on it compared to the SE monsoons.

Dr Konda Reddy Chavva, Assistant FAO Representative( Programme) of the UN,  mentioned how millets are essential to achieve the Sustainable Development Goal 2 of eradicating malnutrition and hunger. He mentioned how currently the Minimum Support Price (MSP) is skewed towards three crops namely rice, wheat and sugarcane and a need for a similarly good MSP for millets too.

Dr Rasha Yousef Omar, Country Director IFAD, New Delhi, mentioned how IFAD has supported the NUS project in the last two decades in the country. She particularly spoke about how IFAD is promoting value added products with 17500 women engaged in supplying millet ladoos to children in ICDS centres in Madhya Pradesh.

Dr Stefano Padulosi, Senior Scientist from Bioversity International mentioned how there used to be more than 1000s of varieties of millets and the need to promote crop diversity and nurture other crops. He called for a multi-sectoral platform comprising all stakeholders from the government, NGOs and private sector for this initiative and for a participatory approach to conserve and use a wide range of variety of millets.

Over the next two days of the Dialogue, scientists, scholars, private sectors, farmers, policy makers and representatives from the media will be attending.