Farming Can Be Profitable With the Right Support: Dr Madhura Swaminathan 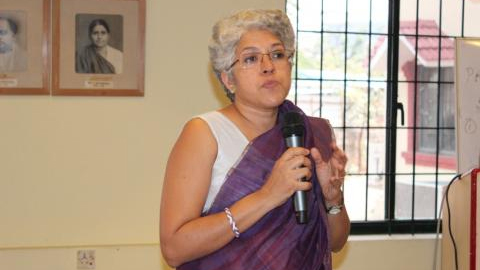 A majority of cultivator households, who are small farmers, are facing negative incomes, but farming can actually be profitable, said Dr Madhura Swaminathan, Chairperson MSSRF, speaking on food and nutrition security at MSSRF on March 8, 2017. In 17 states farmers’ income was less than Rs 1660 per month based on NSSO data, 2012. However, quoting from a study in nine districts of Andhra Pradesh, Dr Madhura said that there was huge disparity in incomes, even within one location. For eg., in Ananthavaram, Andhra Pradesh, median income from crop production was Rs 5700 per annum, while maximum was Rs 29.79 lakh!

The average farmer being a small farmer faces many constraints. With input costs going up and inadequate Minimum Support Price (MSP), they were even getting negative MSP for their produce.

On the consumption side too, farmers face constraints as they have limited access to food. About one-third of the Indian population or about 363 million are malnourished, said Dr Madhura.  Although the Public Distribution System is functioning, there are errors of exclusion. The economic cost of inclusion can be computed but costs of exclusion can be far more severe and complex as it includes costs of poor nutrition, ill-health, days lost in work etc. she said.

The food subsidy share in agriculture never crossed 1% of GDP and Dr Madhura said this should increase to at least 3% taking into account expenditure on pulses, cereals and others.

Prof M S Swaminathan, Founder MSSRF who spoke on the occasion, said women held the entitlement under Food Security Act. In case of cash transfers, there was need to ensure that the woman holds the control of this cash and that it is utilized for the purpose intended.