From paddy to prosperity: Rice BioPark at Myanmar 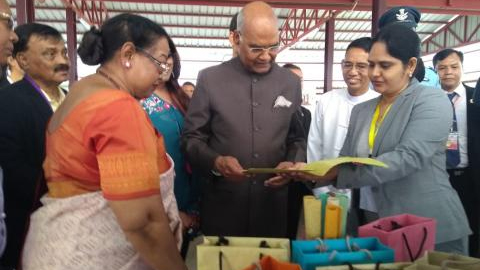 ( Ms. Hameeda, MSSRF, explains about the value added products created at the Biopark to the President)

Chennai, December 18, 2018: M S Swaminathan Research Foundation in partnership with the Department of Agricultural Research, Yenzin, Nay Pyi Taw, Myanmar, has completed the establishment of a Rice Biopark at Nay Pyi Taw. The rice biopark is an initiative is part of the Indo-Myanmar Friendship Project, which is fully funded by the Ministry of External Affairs, Government of India.

The Honourable President of India, Shri Ram Nath Kovind, inaugurated the Rice Biopark facility on December 12, 2018. The infrastructure and capacity building facilities were officially handed over to the government of Myanmar by Dr Anil Kumar, Executive Director in charge, MSSRF. A plaque of the details of the project was also unveiled during this programme.

(The plaque unvieled by the President of India)       (Dr Anil Kumar, ED/ic, MSSRF handing over the facilities to the Myanmar government)

The Rice Biopark concept was conceived by Prof M S Swaminathan, Founder, MSSRF. Myanmar is basically an agricultural country, with rice being one of the major crops grown. However, farmers were only selling the rice grain and wasting the rice biomass. The straw at 1:1 grain to straw ratio, is either burnt resulting in pollution or thrown away. Farmers are unaware of the rich income potential from bio-mass, i.e creating value added products from the straw, husk, and bran.

To bridge this skill gap, the Governments of India and Myanmar came together and signed an MoU in May 2012 for “for establishing a Rice Bio-Park for conversion of rice biomass into marketable value added products”. The initiative was to increase income of farmers and provide jobs in value addition with goal of moving from poverty to prosperity.

The rice biopark has created the capacity to create various value added products from the straw, husk and bran some of which were showcased at the ceremony. Some of the infrastructural facilities and value products created are:

(Card made of rice paper gifted to MSSRF)

Shri Ram Nath Kovind, Honourable President of India complimented the initiative in the visitor’s register by saying “This project aptly demonstrates how we can combine scientific research and traditional to enhance agricultural productivity income choices for our people. He also conveyed his wish that the institute would bring “significant value to the local farming community” and grow to be a leading research institute in the country.