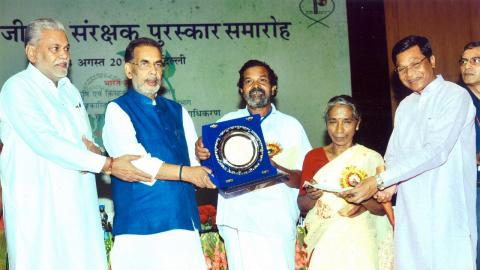 Mr. Cheruvayal Raman, resident of Kammana village, Mananthavadi Panchayath conserves 45 verities of rice seeds, trees, herbs, medicinal plants and spices in five acres of ancestral land.  Raman says that agriculture is part of Kurichya tribal culture, and they believe that the rice seeds are actually conserved by their ancestors. Though many Kurichya families are backing out from cultivating traditional rice verities, Mr. Raman along with his family protects rice seeds as a treasure for next generation.  He has established a network of farmers through an informal seed distribution mechanism. He is ready to give rice seeds for anybody on a condition to return the same amount in the next year. “Seeds cannot be sold because they are the manifestations of farmer’s love, care, and hardwork.  It should not be considered a commodity’’, Raman speaks his heart out.

People from different walks of life including students, farmers and researchers from various parts of the country visit his traditional house to learn natural way of farming.  Mr. Raman is also an activist who travels all over Kerala, and teaches students and farmers about on farm conservation of genetic resources.  He also represented Kerala farmers in the Hyderabad session of Conference of the Parties 11 (COP) convention of biological diversity in October 2012.

Mr. Cheruvayal Raman said that the national award is a great recognition to a farmer like him and expressed his hope that this would help to propagate the message of values of conservation to the society.