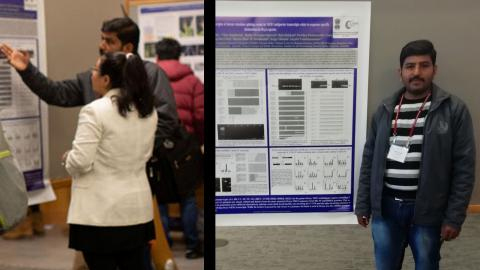 Dr. Gothandapani Sellamuthu, a Research Associate in the laboratory of Dr. Gayatri Venkataraman, MSSRF, Chennai was invited to make a poster presentation after rigorous peer review-based selection at a conference in New York, USA. This was organized in December 2019 by Cold Spring Harbor Laboratory (CSHL) a private, non-profit institution with research programs focusing on cancer, neuroscience, plant biology, genomics, and quantitative biology.

Genes are ‘transcribed’ into ‘messenger RNAs’, the latter also being called ‘transcripts’ (in the nucleus of a cell) that in turn are translated into proteins in the cytoplasm. Usually a given ‘transcript’ is translated into a given protein. However, in certain cases, a transcript may be modified by a process called alternative splicing. The ‘transcript’ produced by the NHX1 gene undergoes alternative splicing resulting in more than one transcript that in turn can affect corresponding protein production.  The data in the poster shows that two such alternative splicing events involving intron retention originated in different Oryza genome lineages during evolution and that both intron retention events occur in transcripts of present day Oryza genomes of the AA type, adding to NHX1 transcript diversity

This work forms part of collaborative research project between MSSRF and the University of Tasmania, (UTAS) Australia, that aims to harness traits related to salinity tolerance present in wild rice to be applied to cultivated rice.

Dr. Gothandapani’s stay and travel were supported by the Science and Engineering Board, Department of Science and Technology (SERB-DST), Government of India.