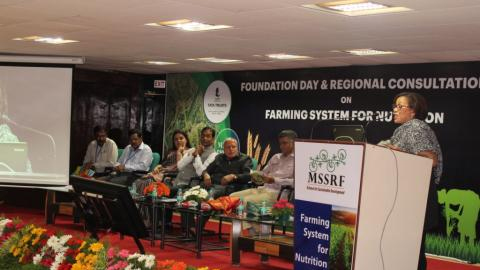 Chennai, August 07, 2017: The way in which agriculture can make a difference to nutrition, was the focus of the Farming System for Nutrition conference organized by MSSRF in partnership with TATA Trusts in Chennai today. Speaking at the inauguration, Karnataka Agriculture Minister Shri Krishna Byre Gowda spoke about how biases against nutritious foods need to be fought against. “We need to change the mindset of people with regard to nutrition and eliminate biases such as calling millets ‘coarse cereals’. In fact millets are ‘Climate Smart Nutri Cereals’ since they are very effective and hardy crops” he said. He shared the Karnataka Government experience of including millets in the Public Distribution System, providing high procurement price for nutritious crops to motivate farmers. The Karnataka Government is also pushing demand for nutritious foods.

Prof M S Swaminathan, Founder MSSRF, spoke of how nutrition cannot be achieved by looking at one or two aspects alone. “A co-ordinated strategy is required to achieve Zero Hunger. More than that, we need concrete suggestions that can be implemented in policy recommendations.” The programme coincided with the birthday of Prof Swaminathan with the speakers and visitors showering him with wishes.

Dr Trilochan Mohapatra, Principal Secretary, Government of India, Director General ICAR and DARE, shared how ICAR was focusing on nutrition as an important area. A pilot project in partnership with ICMR and MSSRF for an intensive-district level intervention for nutrition was to be rolled out in 4 districts across the country.

Dr Maria Andrade, World Food Prize winner, 2016, from the International Potato Centre, Mozambique, shared how the orange-fleshed sweet potato had grown into a large scale programme across Africa which had a huge impact in reducing Vitamin A deficiency in 70% of the population. This was a very useful way of integrating farming for greater nutrition.

The 27th Annual Report of MSSRF was released on the occasion. A booklet detailing ‘Farming System for Nutrition’ – a farmer-led, location specific approach to reduce malnutrition was released. An archive of the lifetime of work on gender, early childhood development and theatre by Mrs Mina Swaminathan was launched by writer Ms A S Padmavathi.  The Tamil Nadu nutrition knowledge portal in partnership with UNICEF was also launched on the occasion.

Chairperson MSSRF, Dr Madhura Swaminathan said “Greater investment is required in nutrition. It was not enough to say that the existing malnutrition is an enigma, since there is not enough attention to nutrition.”