Honouring young mathematicians – the SASTRA Ramanujan prize is a trailblazer 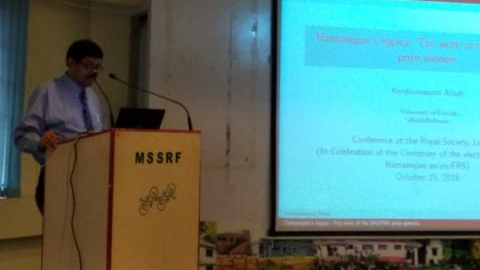 Chennai, December 26, 2018: The SASTRA Ramanujan Prize is an annual $10, 000 prize handed out to mathematicians not exceeding the age of 32, for path-breaking contributions to areas influenced by Srinivasa Ramanujan, said Dr Krishnaswami Alladi while delivering a talk at M S Swaminathan Research Foundation today. The age limit of the prize has been set at 32, because Ramanujan achieved so much in his brief life of 32 years.

The Prize is given each year around December 22 which is Ramanujan’s birthday, in Kumbakonam (Ramanujan’s hometown) at an International Conference held at SASTRA University. It recognises young talent, and some of the recipients have gone on to win the Fields Medal, the equivalent of a Nobel Prize, in mathematics. “In fact two of the four Fields Medallists this year are former SASTRA Prize winners”, said Prof Krishnaswami. Since 2005, when the prize was instituted, 17 mathematicians have been honoured.

Prof Swaminathan, Founder, MSSRF thanked Dr Alladi for a wonderful talk and said Dr Alladi was the ‘Indian Hardy’ and the real teacher who ensured that mathematics could be understood by a lay audience. He said, “Over the last 10 years, December has been become famous for two things — one is the Music Academy and the other is the talk by Krishnaswami Alladi.”

Prof Swaminathan also thanked the SASTRA University for instituting such an innovative award, to stimulate young minds. He mentioned how normally a scientist would be recognised only at a later stage in life, but the SASTRA prize provides encouragement to young scientists to contribute towards the field of mathematics from an earlier age.

Dr Krishnaswami had previously delivered this lecture titled “Ramanujan’s legacy: The work of the SASTRA prize winners” at a conference at the Royal Society, London in October this year. The event was held to celebrate 2018 as the centenary year of the election of Ramanujan as a FRS (Fellow of Royal Society). This shows the exalted status of Ramanjuan in the science and math field across the world, said Prof Alladi.

( In the Pic: Prof Alladi delivering the SASTRA prize lecture in Royal Society, London, in October 2018)