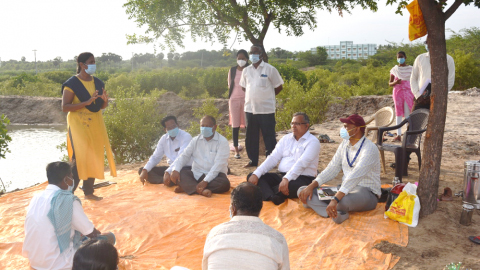 The livelihood of coastal communities as well as coastal ecology is under threat which increased vulnerability of coastal ecosystem. The primary reasons are over population, rapid urbanization lead to change in coastal land use, increasing coastal environmental degradation such as soil erosion, and frequent occurrence of natural disasters such as cyclones, storms, and high waves. The impact of climate change is going to further aggravate the threat due to sea-level rise. The United Nations report on Climate Change projected that India’s coastal areas would witness sea-level rise by 46 to 59 cm by the end of the century. In the backdrop of such threats, there are the following adaptive measures that help in mitigation.

The role of mangroves in protecting our coasts against natural hazards such as storms, high waves, tsunamis, and coastal erosion has been widely promoted. It plays an essential role in adaptive responses ­–both accommodative as well as protected categories. It also plays a crucial role in preventing the ingression of seawater into the land. So, mangroves and other coastal wetlands act as the first line of defense against natural calamities such as sea-level rise.

Mangroves wetland is also rich in bioresources such as fish, prawns, and crabs, providing livelihood security to millions of resource-scarce fishers.

The importance of mangroves forest for small scale fishers and its role as breeding grounds for fish, prawns, and crabs are overlooked for a longer time. The need of the hour is to

recognize the potential of mangroves to provide livelihood security for coastal communities.

There can be a strategy to restore and sustain mangroves wetland and augment fisheries resources to mitigate the impact of sea-level rise as well as enhance the adaptive capacity of the local community.

As part of adaptive responses, the capacity of the local community can be enhanced by changing the land use pattern in saline areas by introducing new sustainable production systems. One such system is Integrated Mangrove Fishery Farming System (IMFFS), where mangrove forests integrate with pisciculture.

In this system, conventional earthen aquaculture ponds get modified in such a way to provide about 30 percent of the area for raising mangrove plantations and 70 percent area for pisciculture. Space for growing mangroves and other vegetation is created by constructing linear bunds or mounds inside the pond. These farms can be designed in such a way to be tidally fed (water exchanged during high tide and low tide), which makes it more environmentally sustainable and economically feasible.

Primarily, the presence of dense mangroves trees would mitigate the impact of sea-level rise whereas sustained harvest of fish would take care of the adaptive capacity of the coastal community. MSSRF successfully demonstrated this model in various places with the support of local fishing communities.

In this backdrop, recently MSSRF initiated a project in Cuddalore district with the support of National Bank for Agriculture and Rural Development (NABARD) on “Integrated Mangrove Fishery Farming System to Enhance Adaptive Capacity of Fishing Community to Sea-Level Rise in Cuddalore District, Tamil Nadu under the scheme on Farm Sector Promotion Fund (FPSF). Cuddalore district is located in northern Tamil Nadu, bordered by the Bay of Bengal in the east. The current project is being implemented, is considered one of the most vulnerable districts in Tamil Nadu due to sea-level rise. This project will demonstrate a 2.10-hectare IMFFS farm in Mudasalodai village by involving traditional and Irulas fishers from Mudasalodai and Kalaignar Nagar fishing villages in the Pitchavaram region. The IMFFS farm pond is designed in a mitochondrial pattern and is a tide-fed pond. The pond development has progressed from weed removal, deepening of water-logged areas, strengthening pond bunds, floral and faunal diversity analysis, and mangrove plantation. The identified site is highly prone to natural disasters, including cyclones, floods etc.,

On 18th August 2021, Chief General Manager (CGM) of National Bank for Agriculture and Rural Development (NABARD) Thiru T. Venkatakrishna visited the project site and interacted with the community who involved in the project. Along with NABARD CGM, NABARD DDM Mr. Vijay Neehar, Cuddalore , Deputy Director of Fisheries Mr. N M Velmurugan and EE of the Fisheries Department, were also present at the site. The project beneficiaries extended their gratitude and also elucidated how this project benefits them. They also added the progress made so far, their interest, contributions, and team working skills. Followed by this, Dr. S Velvizhi, Principal scientist, Fish for All Research and Training Centre, MSSRF, briefed the project’s plan and purpose. She also clarified the queries raised by the CGM and the team. NABARD CGM gave numerous suggestions for the betterment of each of its progress. He expressed that this is one of the best models for resilient climate building for small-scale fishers. He also suggested that MSSRF mobilize these people to form a Farmer producer organization (FPO) through which a greater number of people could benefit in the near future. Besides providing training to villagers on fish processing, seed production, etc., the CGM suggested that other people of the village can also benefit through the Joint-liability groups (JLG) and Self-help groups (SHG) and get profited through loans with the support of the local bank. Furthermore, he recommended that MSSRF integrate more livelihood components like Azolla production, poultry, and seaweed culture. In short, the development of sustainable livelihood opportunities for the villagers and a resilient climate process for the environment.