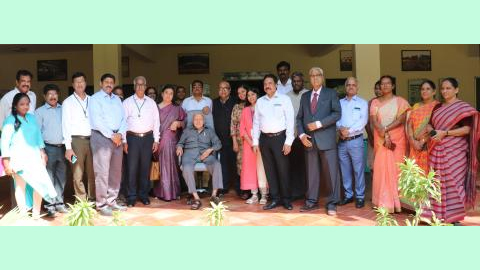 Chennai, January 28, 2019: The kick-off meeting of DBT-BIRAC funded project on food based nutritional security for malnourished rural households through capacity building and establishment of nutri-gardens took place at MSSRF HQ in Chennai on 23rd January, 2019.

One garden is being set-up at the Jeypore campus of MSSRF in Koraput District, Odisha, and three other gardens in partnership with Krishi Vigyan Kendras in their premises at Kanpur Dehat District, Uttar Pradesh, in Palghar District, Maharashtra, and at Thirur in Thiruvalluvar District, Tamil Nadu.

Dr. Poorvi Mehta, Agriculture Head of Asia at the Bill & Melinda Gates Foundation said that “we have been giving importance to high yielding and productivity and now it’s time to give attention to the nutrition part”. She also spoke about the importance of agriculture diversification through mixed farming system for this project. Dr. Srivalli Krishnan, Senior Program Officer for Global Development and Agricultural Development at the Bill & Melinda Gates Foundation spoke about the importance of linking other institutions and organisations as advisories at various stages of this project.

During the speech of Professor Swaminathan, he stated that nutrition security concurrently has to address 5 major components, 1) calories deficiency with adequate amount of food, 2) protein hunger or protein deficiency, 3) hidden hunger or micronutrients deficiency, 4) clean drinking water, hygiene and sanitation and 5) finally primary education to children. Dr. Renu Swarup, Secretary of DBT and Chairperson at BIRAC, who joined the meeting through a video conference, spoke about the necessity of impact assessment of the four nutri-gardens to get scientific evidence for future scalability.

Dr. N. Kumar, the Vice Chancellor of Tamil Nadu Agricultural University said that integrating millets in nutri-gardens is important and also shared the information of highly potential and nutritious local species that could be grown.

Dr. G. N. Hariharan, the Principal Investigator of the project outlined the strategies to be adopted by the Garden in developing nutrition-responsive agriculture. The project will be implemented in partnership with 2000 small-holder farmers.

Dr. N. Anil Kumar, the executive director in charge, earlier in his welcome address emphasised the thrust given in mainstreaming genetic diversity of naturally bio-fortified plant species across the 25 targeted species of the project.