Life is not a meaningless journey from womb to the tomb : Dr Karan Singh 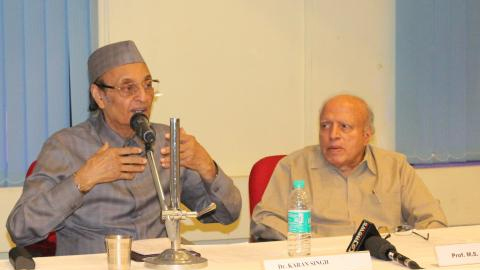 Chennai, February 28, 2019: Padma Vibushan Dr Karan Singh, an Indian politician, philanthropist and poet was a member of India’s Upper House of Parliament, the Rajya Sabha, representing the National Capital Territory of Delhi. He is a senior member of the Indian National Congress Party and served successively as President (Sadr-i-Riyasat) and Governor of Jammu and Kashmir. Singh is the son of the last ruler of the erstwhile princely state of Jammu and Kashmir, Maharaja Hari Singh. In the 26th amendment to the Constitution of India promulgated in 1971, the Government of India, of which Karan Singh was a Union cabinet minister, abolished all official symbols of princely India, including titles, privileges, and remuneration (privy purses).

Karan Singh visited MS Swaminathan Research Foundation yesterday and delivered a millennium lecture on ‘Vedanta Today’. “We live in an age of great turmoil, trauma and transition, with the old collapsing and the new struggling to be born. As we find ourselves precariously poised between a disappearing past and an uncertain future, suspended in the middle with the old established landmarks disappearing, and with the technology changing our lives, we find ourselves sometimes inundated in the ocean of information”, he said.

In order to get wisdom, compassion, and the understanding, he says that we need to know the basic concepts of Vedanta. The first basic concept of the Vedanta is the unity of all existence, the universe is the innovation of the ‘Brahman’ (the creator), the one divine mighty power. The second concept is the reflection of the brahman in each one of us, ‘the Aathma’. The lord resides in the heart of all beings; therefore as human beings we move up according to the evolutionary change, each one of us should be aware that there is a spark of divinity in us. All pervasive brahman and the aathma within each human being are the two basic concepts that must be grasped. For example, the aathma within the human being is the basis of democracy. If you believe that each human being is potentially divine then you cannot distinguish on the basis of creed, caste or colour.

The gyan yoga distinguishes between the real and the unreal, to see behind manifestation, gyan yoga means discriminating between what we see and what is the reality behind. Gyan yoga involves meditation, it involves reading one’s visions, and it involves constantly refining the consciousness.

Bhakthi yoga is the way of the heart, though one may be very intelligent, brave and competent, one’s heart must open, one needs to love and surrender to the divine, as mind and the heart are the two different engines, they need to travel together. Karma yoga is the way of the arms. Work is also a powerful medium for the spiritual growth. It does not mean all the work, but the work that is dedicated for a greater cause, for the betterment of the humans. Man moves towards perfection if his work is dedicated to the divine, one’s position and designation does not matter, the attitude towards the work matters, it can help a great deal in the spiritual quest.

The raja yoga is the way of the breath. There are powers within the human body that will lead us to illumination. The way we breathe can energise the chakras one by one. The Intellectual, the emotional, the physical and the psychic are represented holistically as an integrated philosophy to unify the aathma and the brahman and therefore to fulfill the promise of our human existence. Hence, life is not a meaningless journey from womb to the tomb; it is the exciting adventure of the consciousness. It is a tragedy that large numbers of people skim across life without looking deep within.

Three other points that Karan Singh stated is the concept of the world as a family, the concept that there is only one almighty power and the welfare of all beings. He said “the concept of globalization is setting back unfortunately due the rising nationalistic powers but the science and technology ultimately has forced us to become one human. There is only one almighty power, the wise call it by many names. Secularism is the basic civilization concept. Interface movement gets people together into a harmonious dialogue. Finally is the welfare of all beings, the idea of Vedanta is not the welfare of one being, but the welfare of all the beings. There are no easy paths towards greatness. One needs to move towards the difficult path for the individual greatness or for the collective salvation. So we need to move towards new society, new India, new world and new consciousness. Wake, arise and move boldly towards our goal!”

Professor MS Swaminathan, the founder of MSSRF and Dr N Anil Kumar, the Executive Director of MSSRF were also present during the occasion.