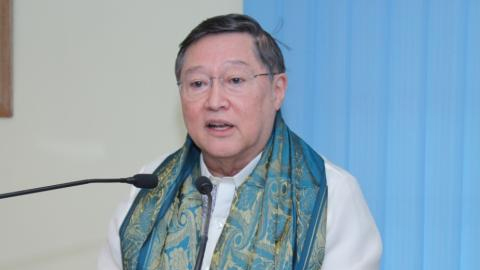 Chennai, June 28, 2018: Finance and monetary policy should be linked to rural development, said Mr Carlos Garcia Dominguez, Secretary, Department of Finance, Republic of the Philippines, while delivering a special lecture at M S Swaminathan Research Foundation (MSSRF) today. He mentioned that for the first time in Philippines an agricultural expert will now be part of the Monetary Board, so that policy can be formulated with inputs keeping in mind the rural economy as well.

Mr Dominguez said that Philippines’ economic growth should shift from a consumption-led model to that of an investments-led one. Investments should focus on big infrastructure projects such as irrigation projects, railways, roads, airports and others that have a high impact on job creation and poverty reduction, he said indicating that poverty reduction will lead to reduction in hunger. The aim is for investments to increase from the current level of 6.3% of GDP to 7.3% by 2020 so that the Philippines government’s target of reducing poverty levels from the current 20% to 14% by 2022 can be achieved. Mr Dominguez also reiterated the need for a progressive tax reform programme which could prevent polarisation of wealth and thus bring about a reduction in crime rates.

Responding to a question from the audience about the difficulty of changing the mindset of the population towards sustainability, the Secretary said it takes many generations to change mindsets. He said when he was young, the concept of exploitation was prominent but the attitude of the younger generation has shifted more towards sustainability as they are more aware.

Mr Dominguez spoke of the important role played by Prof M S Swaminathan, Founder, MSSRF, in helping increase rice production in the Philippines when he wasDirector General of the International Rice Research Institute (IRRI) in 1986. The country had at the time been suffering a bad drought. Prof Swaminathan was, in fact, the inspiration for setting up the Philippine Rice Research Institute, said Mr Dominguez. “Prof Swaminathan was keen that the country should have its own capabilities in addressing food security,” he said.

In his closing remarks, Prof Swaminathan observed how the Millenium Development Goals and the subsequent Sustainable Development Goals have been able to address poverty adequately, yet hunger remains a problem in developing countries.. He said it was important to marry nutrition, health and agriculture in order to overcome the enigma of both poverty and hunger. On climate change, he said it was important to take anticipatory action; for eg. MSSRF, has set up a genetic garden of halophytes as a climate adaptation technique. Halophytes are edible plants that thrive in salt water.