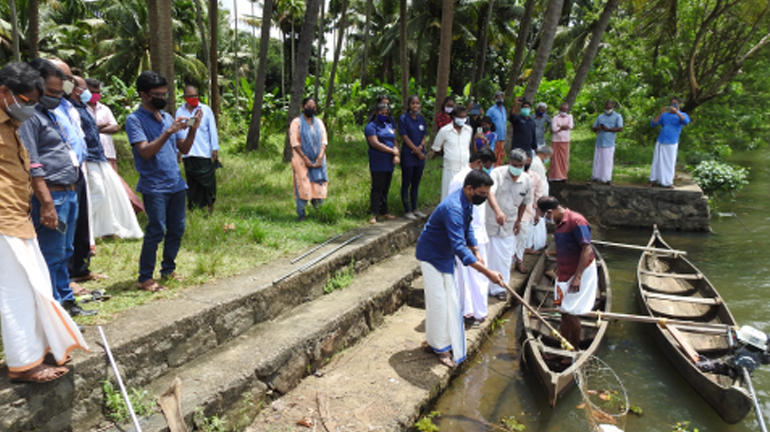 Two major initiatives to clean waterways and training on solid waste management for local self-government representatives were the highlights of the Swacchata campaign on the occasion of ‘Gandhi Jayanti’. On October 2nd, stakeholders and Panchayat Raj Institution members from 30 villages gathered to be a part of these efforts. 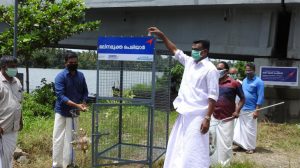 solid waste management with officials from Haritha Keralam mission focused on decentralized waste management. Green Worms – asuccessful enterprise from the state shared their model adopted by Local Self Governments in Kerala.  The very first step in solid waste management is training and mentoring provided to vibrant Green army called Haritha Karma Sena under the Local Self Government Department (LSGD). The team, trained in sorting and collecting the waste materials, passes this to a Material Collection Facility and Material Recovery Facility. The last step is Responsible Disposal of materials. Many LSGDs are already into it and some are trying to strengthen the system. Mr Sreerag Kuruvatt, Project Manager, Green Worms and Mr Jagajeevan, State Co-ordinator, Haritha  Keralam Mission addressed the participants.

In Kerala, Alappuzha district has a major portion of wetland (Vembanadu Kayal) in Kuttanad region. The rivers Pampa, Achankovil and Manimala flow from Sabarimala towards Vembanadu lake. These rivers and lakes are connected through small canals. Human dwellings are residing in and around bunds of the canal. During 2018 floods, there were excess flow of water into these canals which resulted in deposition of soil sediments and other waste. The natural flow of water in these canals has got obstructed due to weed (water hyacinth) growth. The intensity of its growth blocking entry of light into water, badly affected the diversity of indigenous fish varieties and other vertebrate and invertebrate fauna. The high nutrient content of water, due to flow of sewage, agrochemicals and land washouts have resulted in water pollution, increased mosquito population and also blocked the waterway mode of transport. This canal currently under silted condition hinders day-to-day transport activities and also poses various threats to people living in the area. Considering the need, HDFC Parivartan provided support for rejuvenation of Kayalpuram canal which stretches to 1.75 km in Pulincunnu. Nearly 1000 people in and around the canal would benefit by water transportation. Pollution-free water body will ensure opportunities for inland fisheries. Mr Joseph Xavior, Grama Panchayat President announced this Pulincunnu Kayalpuram canal rejuvenation initiative.

Parivartan Clean Periyar Campaign was launched in association with the Periyar Theeramaithri group and National Service Scheme at Puthenvelikkara Gramapanchayat of Ernakulam district. Mr P. V. Liju, President Grama Panchayath, Puthenvelikkara and Adv. T.G. Anoop (President, Grama Panchayath, Chendamangalam) together, launched the program. This activity attempts to clean a portion of Periyar River collecting non-biodegradable waste manually and by using the traditional boat and net technique. The hoarded plastic waste will be stored in specifically designed metal cages and will be responsibly recycled or disposed regularly by the Panchayath authorities.

The active participation of local self-government representatives and other stakeholders made the events a memorable way to pay tribute to Mahatma Gandhi.

These initiatives in Kuttanad are being implemented by MSSRF supported by HDFC Bank’s CSR Parivartan as part of the Holistic Rural Development Programme in Kerala.