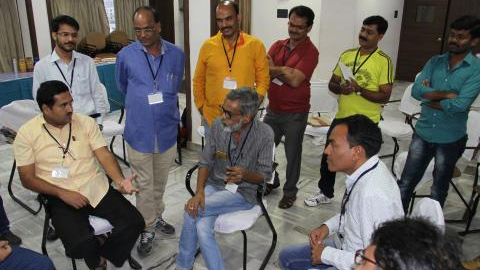 The Hindu Media Resource Centre (HMRC) of the M S Swaminathan Research Foundation (MSSRF) in association with the National Biodiversity Authority (NBA) organised a three-day media workshop for journalists at Kakinada, Andhra Pradesh between May 31 and June 2, 2018. The workshop’s aim was to sensitise journalists on conserving biodiversity as a means to combat climate change.

Dr B Meena Kumari, Chairperson, NBA spoke about the provisions of the National Biodiversity Act, 2002 and the need for the government to implement it in its entirety. Stating that biodiversity conservation is the basis of human life, Mr T Rabikumar, Secretary, NBA, emphasised the need for conservation and pointed out that humans were already consuming more than the capacity of production of planet earth.

Two field visits were organised: to Coringa Wildlife Sanctuary and Maredumilli, Papikonda Wildlife sanctuary. At Coringa, journalists got to see for themselves the mangrove ecosystem, and heard from community workers like Biodiversity Management Committee Chairperson Ms Dadala Rani, who is the Sarpanch of Koringa. At Maredumilli the journalists learnt about the terrestrial ecosystem. Ms Aparna Naryanan, Media Associate of the HMRC, presented the findings of a desk research carried out on the media’s reporting of biodiversity conservation.

Mr SLB Misra, chairman of the State Biodiversity Board, Andhra Pradesh, urged the media to sensitise the public and policy makers on biodiversity issues.

Having gained a better understanding of biodiversity conservation, the journalists expressed the need for more such workshops. They also suggested that a consortium of journalists and scientists be formed, to enable two-way interaction on issues relating to biodiversity.