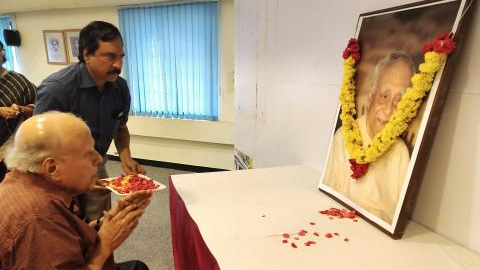 Chennai, October 14, 2019: As a mark of honor to the memory of the ‘Father of Nutrition Research in India’, a Dr C Gopalan Memorial Lecture would be instituted said Prof M S Swaminathan, Founder MSSRF. Announcing this at a condolence meeting held at the M S Swaminathan Research Foundation today, Prof Swaminathan recalled at how impressed he had been about the depth of work of Dr Gopalan. “He would never compromise on facts. This memorial lecture is a fitting tribute to continue sharing his message on nutrition. His concept of a food-based approach rather than a chemical-based approach to achieve health for all made a difference in nutrition thinking. Also due to his contribution, the National Institute of Nutrition has made much impact and has now been recognized internationally.”

Dr Gopalan’s daughter, Ms Malini Seshadri spoke of how she was learning something new each day, about her father from various messages she was receiving. “We are not going to mourn his passing, but celebrate his life, which is full of achievements and we will treasure his memories and work, taking pleasure in what he did for the country” she said.

Referring to him as a crusader to the cause of nutrition and nutritionists, Dr Rama Narayanan, Nutrition Society of India, Chennai Chapter, recalled the deep interest and commitment Dr Gopalan had displayed to nutrition work in India, with the greatest humility. “He was fearless in the espousal of his cause of nutrition and when he believed in something he would say it – there was nothing off the record,” she said.

Dr R V Bhavani, Director – Agriculture, Nutrition and Health Program at MSSRF placed in context the work of Dr Gopalan in making the link between agriculture and nutrition which had such a significant impact on current developments in India and globally.

Former Director General of the Indian Council of Medical Research (ICMR), and Director National Institute of Nutrition, Dr Gopalan who also started the National Nutrition Monitoring Bureau made immense contributions to nutrition research in India. Recipient of numerous awards and honors including the Padma Bhushan, he passed away on the 3rd of October at the age of 101. Since then, condolences from the science and nutrition community have been pouring in, recalling his work and life. This memorial lecture is an effort to focus on key developments in nutrition research in India and across the world.