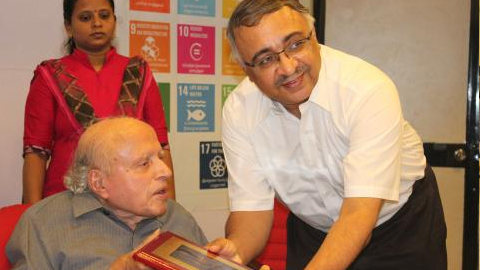 Dec 05, 2019: Prof M S Swaminathan received the ‘Most Admired Gandhian of Tamil Nadu Award’ for his service to society through agriculture and Gandhian values. The award was presented by Fortis Malar Hospital, Chennai and Senior Citizens Group of Besant Nagar (SCGOBN).

Prof Swaminathan in his acceptance speech, recalled how he was first introduced to Gandhian values. “When Gandhiji came to our house around 1933 when my Mother asked us to give the gold chain and the bangles we were wearing (three brothers) to Gandhiji, at that age I did not understand what he will do with gold ornaments.  Later on, I learnt that he will use them for the welfare of Dalits and for opening Hindu temples to Dalits. Thus, I learnt that we must behave as trustees of our surplus wealth and should give that away for good causes.” He said in 1944 he listened to Gandhi’s talk emphasising the need for harmony between technology and environment, this was Gandhian Agriculture. In 1973, he gave a lecture on this in the Sardar Patel Memorial Lectures of All India Radio.

Dr Pradeep G Nayar, Senior Consultant at Fortis Malar Hospital participated in the programme to present the award. Prof V Chandrasekhar the president of SCGOBN said that their group is silently working for the welfare of the society for the past 10 years. As part of their service, they are identifying persons who have contributed to the development of the society in a Gandhian way and their committee has chosen Prof Swaminathan for this award for his service in the sector of agriculture on making the country self-sufficient in food production.

The event focused on Gandhian values in society. Prof Swaminathan further spoke of Gandhiji’s ‘Swadeshi’ which was fundamental to the Green Revolution, reorienting the thinking of agricultural scientists. Recalling that, “When Gandhi went to Odisha for the first time in 1920s he was shocked to see what he referred to “as walking skeletons of Odisha”. He came to the conclusion that agricultural alone will not give the requisite income. Therefore he wanted diversification of work and income opportunities. This led to the growth of small scale industries in Odisha including filigree work.  Today Odisha is prosperous because of this approach.  This is also the basic approach of the Rice BioPark idea,” said Prof Swaminathan.

Renowned persons like Dr V Shanta, eminent Indian oncologist, who is also a recipient of this award, scientists, media persons, students, and representatives of Senior Citizens Club and MSSRF participated in the programme.