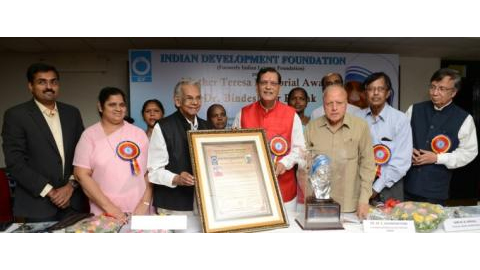 The Prime Minister has ignited the candle of cleanliness among Indians to make India clean. He has asked Indians to restore the culture of sanitation which Indians had during Harappa civilization. We should join hands with the Prime Minister with all the might and resources, one has to make India clean and free from defecation in the open. Be civilized, be cultured, be clean, make India clean and standout in the row of civilized, cultured and clean nations”, observed Dr. Bindeshwar Pathak, while receiving the Mother Teresa Award 2014 from Dr.M.S. Swaminathan at a function organized by Indian Development Foundation at MSSR Foundation, Taramani, Chennai on 27th of October 2014.

‘It gives me immense pleasure to receive an honour in the name of Mother Teresa, who set a sterling example for serving the sick and needy. The efforts of Indian Development Foundation in enlisting people’s participation and support for national health and development programs is noteworthy’ he added.

Dr. Bindeshwar Pathak, founder of Sulabh International was conferred with the prestigious Mother Teresa Memorial Award 2014 for his five decades of relentless contributions to India’s sanitation, health and hygiene movement.

Dr. A.R.K. Pillai, founder President of Indian Development Foundation said that IDF has been working for the improvement of health, education of the deprived children and empowerment of women, belonging to lower economic strata. “In the course of our varied activities in the social field, it has also been our resolve to locate gems of human beings who have outlived the dimensions of normal life and served humanity all through their lives” he added.  Dr. Pillai said IDF has been bestowing Mother Teresa Memorial Award on personalities who have been the change-makers of India.  Earlier recipients of the Mother Teresa Award are : Dr. M.S.Swaminathan (2010), Shri N. R. Narayana Murthy (2011), Shri D. R. Mehta (Jaipur foot) (2012) and Dr. V. Shanta (2013)