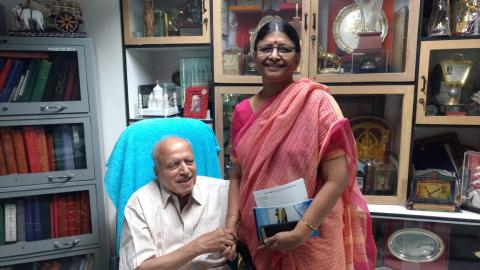 July 31, 2018: MS Swaminathan Research Foundation on Tuesday bid farewell to one of its senior-most and respected staff members, Dr R Rukmani, who had been heading the Food Security programme of the Foundation.

The Food Security programme that Dr Rukmani headed worked in the areas of policy advocacy as well as direct interventions in rural communities. Dr Rukmani, who has a background in economics and has studied various aspects of urbanisation, has been lauded widely for her substantial role in the mapping of an urban food security atlas. Professor MS Swaminathan, Founder, MSSRF, too acknowledged Dr Rukmani’s contribution in a farewell letter addressed to her. “I want to express our gratitude to you for your monumental contributions to the programmes of MSSRF starting with the urban food security atlas. I wish you much happiness, good health and professional satisfaction in the next phase of your distinguished career,” Professor Swaminathan wrote.

At a farewell gathering in honour of Dr Rukmani, Professor Swaminathan recalled how former President APJ Abdul Kalam had expressed appreciation about the urban food security atlas that she brought out. Speaking of her professional qualities, Professor Swaminathan said,” Scientists may disagree on many things but Rukmani has always argued only on the basis of economic and scientific evidence.” He also praised Dr Rukmani for the meticulous work on computing the cost of achieving zero hunger in Puducherry, which was entrusted to her by Professor Swaminathan as part of a UN project, which aimed at meeting the Millenium Development Goal 1 (eradicate extreme poverty and hunger) which has now been taken forward as Sustainable Development Goal 2 (Achieving Zero Hunger).

Colleagues of Dr Rukmani extolled her managerial style. She was firm but gentle, kind, generous and above all trustworthy, they said. She provided a nurturing environment in which young scientists could do their research, refine it and gain invaluable mentorship, said Manjula Menon and Samyuktha Kannan.

Dr Rukmani was always professional, and as Professor Swaminathan pointed out, she would never say no, and was always efficient at her work. Professor Swaminathan, Chairperson Dr Madhura Swaminathan and Executive Director Dr V Selvam all wished that Dr Rukmani would continue her association with MSSRF in some capacity and help guide and mentor the next generation of scientists, economists and development professionals.