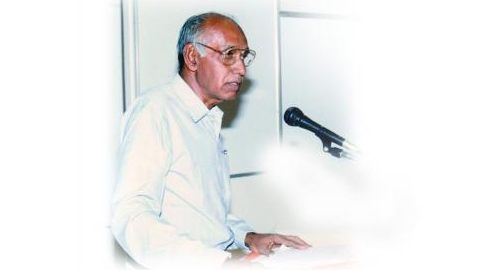 Chennai, 11 July, 2016: MSSRF held a condolence meeting for Dr. S. John Joseph, IFS (Rtd), former Principal Chief Conservator of Forests, Government of Tamil Nadu and a close associate of MSSRF from its beginning, who passed away recently. He played a critical role in shaping the Coastal Systems Research and Biodiversity Programme areas of MSSRF. He passed away on 30 June, 2016.

Dr. Hariharan said he worked with Dr. John Joseph in 1995, when the latter took a keen interest in lichen research. Dr. Rengalakashmi, spoke of a man who was always asking about the work going on in the foundation and the association was greater as they lived in the same area. Dr Balaji also spoke about a man, who keenly interested in forest conservation and would routinely ask him to name the plant species found in forests.  He said Dr John was also keen to have a Sustainable Action Plan for the Andaman and Nicobar Islands after the tsunami of 2004 wiped out many species there.

Prof Swaminathan who recalled his association with Dr Joseph, after they went together to see the Pichavaram mangroves, described him as a very committed and passional professional and a very considerate human being. He placed on record his appreciation for Dr Josephs’ immense contribution to MSSRF’s work and prayed for his family at this time of grief.

Dr. John will be greatly missed personally and professionally at the Foundation. As Dr. Selvam said, rather than moan the loss of a great soul, it is better to celebrate his life and try to follow in his footsteps.

Scientists, students and staff joined in the condolence meeting, observing silence as a mark of respect to the departed soul.