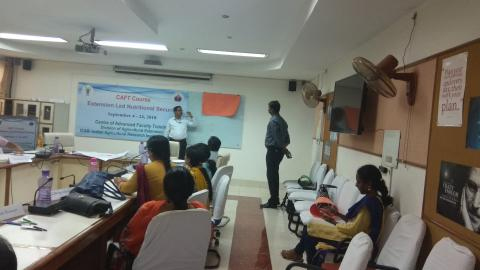 M S Swaminathan Research Foundation (MSSRF) was invited to conduct a session on nutrition sensitive agriculture by ICAR-IARI as part of a three week workshop on “Extension led Nutrition Security” in New Delhi, on 20 September 2018.

Farming System for Nutrition (FSN) is a model that entails mainstreaming the nutrition dimension in the design of the farming system based on locally available crop and animal husbandry resources and extant farming practices. MSSRF under the guidance of Professor M S Swaminathan has worked on demonstrating feasibility of the FSN approach in Wardha and Koraput districts, under the research programme on Leveraging Agriculture for Nutrition in South Asia (LANSA). It has also been engaged in advocacy of the approach in four states: Maharashtra, Odisha, Andhra Pradesh and Bihar.

Following an introduction to the concept and the evidence from MSSSRF led study under LANSA, participants were divided into four groups based on the regional representation and asked to develop a FSN model for any one region for the forthcoming kharif season. Models were prepared for Andhra Pradesh, Central India (MP, UP, Haryana), Eastern region (Bihar, West Bengal and Manipur) and Delhi, Jammu Kashmir and Aurangabad, and presented for discussion. The models designed included biofortified paddy and maize, nutrition garden suggested by MSSRF, pulses and millets, fishing and poultry.  Some models also explained cultivation of vegetables in the farm bunds as well as in fish pond bunds.