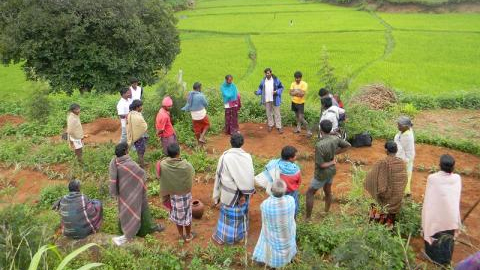 July 2020: The work of MSSRF in Kolli Hills has been recognized with the Best Performance Award by India’s largest agricultural bank, for work on tribal development. The announcement came at the 39th Foundation Day of the National Bank for Agriculture and Rural Development (NABARD) for activities implemented under the Integrated Tribal Development Project between 2010 and 2018.

Over the years, MSSRF has observed that small and marginal tribal farmers often migrate to other places in search of better livelihood leaving their lands fallow. Limited accesses to support systems like quality seeds, saplings, training and other allied techniques were critical obstacles for hill tribes that forced them to seasonally migrate. This project popularly known as WADI, aims to enhance livelihood opportunities for tribal communities through their own land.

Speaking on the award, Dr Oliver King, Principal Scientist and Head of the Centre said, “It has been a long and the journey was tough but we are glad that the efforts have started yielding results now. We are now making progress with the second phase of the initiative covering 500 farm families in the northern and southern panchayats through by establishing multi-story mixed farm to increase income, enhance nutrition supply, and ensure environmental sustainability.”

Over the years, about 1000 acres of unused and barren land were converted into fertile land
Farmers have cultivated multiple crops such as jack, mango, cashew, lime, orange, coffee, pepper, clove and silver oak that ensured long term income opportunities from their own land
215 mini percolation ponds and 17 common wells are established in four panchayats that helped these farmers for irrigation, livestock management and household consumption
About 138.58 tons of vegetables and 83.62 tons of millets were harvested by farm families and increased local consumption
150 on-farm, off-farm and non-farm small scale enterprises are established
Around 8401 training days organized leading to skill empowerment of the farm families.
This initiative led for formation of farmers’ producer organization “Kolli Hills agri-bioresource Producer Company limited” covering 583 tribal farm families.