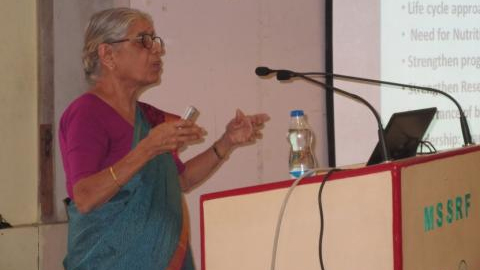 Delivering a seminar on “Current Issues in Nutrition” Dr Bamji spoke about taboos during pregnancy and lactation that prevent women from gaining the benefits of food. Misconceptions around consuming papaya and banana, throwing away water from boiled rice and discarding the colustrum, (first breast milk) are some practices still prevalent she said. There is also misconception that breastfeeding alone is required for the first year of birth with complementary feeding being neglected after six months.

One-third of child deaths in India were caused due to malnutrition said Dr Bamji, giving an overview of various nutritional deficiencies that were now emerging, including Vitamin A , B and D, anemia  and calcium which also were due to incorrect food habits.

The nutritionist talked about Dangoria Charitable Trust’s field level intervention, in Telengana, where focus is on awareness among community members to enhance the nutritional status of families. She pointed out that only when awareness, access and affordability come together, can the community reap the benefits towards a much better nutrition status.