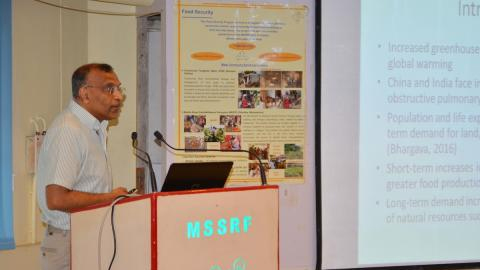 Chennai February 22, 2018: Rice production and export alone cannot cause ground water depletion in India, other factors such as temperature, rainfall and even population can be contributors, said Prof Alok Bhargava, School of Public Policy at the University of Maryland in a seminar at MSSRF today. Rice is a staple food for South Asians and thereby policies, particularly that of free electricity, can result in excess water usage for rice and in turn cause depletion of ground water.

In his seminar titled “Climate Variability, rice production and ground water depletion”, he said it was simplistic to view rice exports as water exports. He showed with econometric models, that although rice output increased with population changes, and rainfall, there was a need to also take variables like latitudes, longitude and altitude while preparing empirical models.

The data taken from 27 states across India between 1980 and 2010 provided a big picture overview across the country. The soon to be published paper has shown correlation between water depths and population i.e for every population increase of 33 million, the water depth has increased. However, the water – rice production co-relation was much lower indicating that population was a bigger concern than rice production, when it came to pressure on water in India. This was particularly true in the states of Bihar, Madhya Pradesh, Maharashtra, Uttar Pradesh, West Bengal and Rajasthan. He also showed how the water depth, based on the data on wells, increased while moving northward from the coast to the hilly areas.

He also placed great emphasis on reducing ‘unwanted fertility’ and skilling the workforce thereby putting less pressure on natural resources and the environment. There was limited focus and discussion on population, globally and even the Sustainable Development Goals did not even mention this, he said. However, this would be one of the most crucial issues that would need to be addressed in the years to come.

The lecture was attended by students, researchers and scientists.