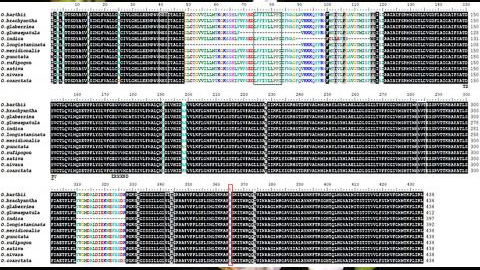 Dr Gothandapani Sellamuthu, a Research Associate and Dr Vidya Jegadeeson, a former Ph.D scholar  in the laboratory of Dr Gayatri Venkataraman, MSSRF, Chennai have jointly co-authored a research paper accepted in the Frontiers in Plant Science, an open access journal (https://www.frontiersin.org/articles/10.3389/fpls.2020.00267/full).  The work was initiated by Dr. Jegadeeson as part of her doctoral thesis (she received a Ph.D degree in October 2019) and continued subsequently by Dr Sellamuthu. The research article traces the origin of two alternative splicing events in transcripts of the vacuolar antiporter gene (NHX1) in the genus Oryza (wild rice as well as cultivated rice) that plays a role in salinity tolerance. ‘Transcripts’ constitute ‘working formats’ of genes (DNA) and consist of messenger RNA (mRNA). mRNA in turn are ‘translated’ into protein. The genus Oryza consists of 27 species and eleven genome types. The ‘transcript’ produced by the NHX1 gene in the genus Oryza undergoes a process alternative splicing (seen to occur in eukaroyes), resulting in production  more than one transcript that in turn can affect corresponding protein production.  Research by both co-authors shows that two such alternative splicing events involving NHX1 transcripts  originated in different Oryza genome lineages during evolution and that both events occur in transcripts of present day Oryza genomes of the AA type, adding to NHX1 transcript and possible diversity.

mRNAs differ from their DNA templates in that they do not contain non-coding  DNA segments ‘introns’ (that occur within the DNA templates) that are removed during splicing.  A second part of the work shows that the halophytic wild rice Oryza coarctata  has a mRNA copy (called a retro-copy) of the NHX1 gene inserted in its genome. Retrocopies of genes differ from their genomic counterparts in that they lack the introns. Retrocopies are known to be present in both animal and plant genomes and contribute to new gene emergence and may also play roles in ‘gene silencing’. Silencing implies that the retrocopy of the gene (lacking introns) can interfere with mRNA production/function from the genomic copy (containing introns). The precise role of the O. coarctata retrocopy in NHX1 function in this plant species remains to be established.

Dr. Gothandapani was invited to make a poster presentation on this work at the Cold Spring Harbor Laboratory (CSHL), New York  a private, non-profit institution with research programs focusing on cancer, neuroscience, plant biology, genomics, and quantitative biology in December 2019. He received a Science and Engineering Board, Department of Science and Technology (SERB-DST), Government of India travel grant for the same.

This work was funded by collaborative grant provided to MSSRF (Department of Biotechnology, Government of India) and the University of Tasmania, Hobart (Australia-India Strategic Research Fund) to examine mechanisms of salinity tolerance in rice.