New Tools at MSSRF to get kids hooked to science 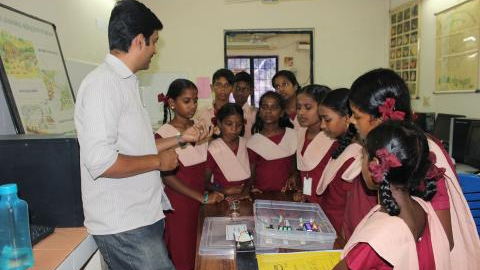 August 2017: The ‘Every Child a Scientist Programme’ of MSSRF that provides science awareness to students from corporation schools, has a new attraction.  A set of sensors are now used, to give children an idea of how devices such as these can have a variety of applications within science.

The ECAS programme started in 2002 was the brain child of Prof M S Swaminathan. The programme focuses on subjects related to biodiversity conservation, sustainable and equitable use of resources, basic health and hygiene and environmental issues. Children from less privileged communities get an opportunity to learn science with activity based teaching with an emphasis on making learning fun by doing rather than as just concepts.

Arul Mozhi is bright and an enthusiastic student studying in Class 8. Her hand is always raised for a reply to any question. She studies in a Government-run school in R. A Puram, that offers free education for children from economically poorer sections of society. She said the ECAS programme has made science interesting and she has been able to understand the concepts much better here.

Sreemati, her friend, who watches with bright eyes, reiterates Arul Mozhi’s view. There have been many students too in the past who have similarly benefitted from the ECAS programme.

The ECAS programme is conducted during the academic year from June to March. About 15-20 students are selected from a corporation school and they participate in the programme which usually goes on for 10 days for each batch at the MSSRF campus in Chennai. The ECAS programme has reached out to 4000 students across Chennai, Kerala and Odisha.