Now, a chance for Kerala school kids to learn how to farm and conserve traditional rice varieties 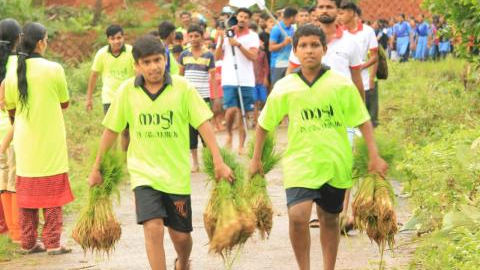 A novel programme to restore rice paddies and revive on-farm conservation of traditional paddy was launched in Kasaragod district on July 1, 2018 by M S Swaminathan Research Foundation with the support of the Kerala government. The initiative, which ropes in school and college students as well as teachers in an effort to conserve and restore traditional paddy varieties, was inaugurated by Sri E. Chandrashekharan, Revenue Minister of Kerala.

The programme, named ‘Natty Karshika Padashala’ meaning ‘Learning Centre for Rice cultivation’ has been started in Aravath Padashekharam and will be implemented by PULARI, a community organisation, with support of the Kudumbashree Mission and Pallikkara Grama Panchayath Krishibhavan.

The need for such a Padashala or learning centre has arisen because interest in rice cultivation in the district is fast diminishing and it has given rise to the resultant problems of depletion of well water and ground water storage. The Natty Karshika Padashala will be run as part of MSSRF’s Water Knowledge Centre.

The aim is to ensure that students who have been selected will commit to the programme and will consistently participate in the agricultural processes, from the transplantation of the paddy crop up to the harvesting stage.

It is envisioned that involving students in agricultural processes would kindle in them an interest in rice cultivation and protection of rice paddies. As part of the programme, students will be taught about the significance of rice genetic diversity in enhancing climate resilience as well as in making diverse micro-nutrients available for human consumption. The ecological and cultural value of rice paddies will also be taught as part of the curriculum.