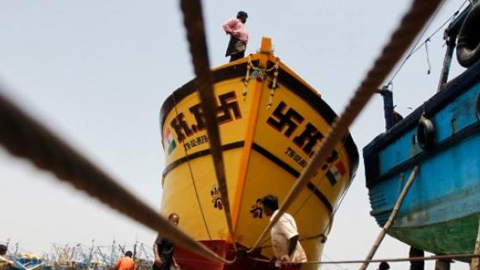 Jayashree Balasubramanian is a senior communication professional and director at the M.S. Swaminathan Research Foundation. Views expressed are personal.

The blue umbrella, nearly blending with the sea in the background, offers little protection from the scorching tropical heat to Arockiyem, who stands with a group around him.

As they peer at the smart phone in his hands, he explains how the device can help at sea, in the midst of nowhere. Over a dozen fishing community members in the port town of Tuticorin, in south India, have come to listen, and while the elders look undecided, youth quickly catch on, whipping out their own phones.

About 1,600 kilometres away, Rabindra Behara also is explaining the technology to fishers seated on brightly colored sheets in the village of Golabandha, in Odisha. Both communities speak different languages, but are bound by their profession and its inherent risks.

In December 2004, a devastating tsunami took an estimated 220,000 lives in and alongside the Indian Ocean. Besides worst-hit Indonesia, many of India’s coastal districts bore the brunt. In some – like Nagapattinam alone – over 6,000 people were killed, 85% of them in fishing communities. The event sounded a high alarm to build resilience especially among coastal communities.

There are an estimated one million active fishing communities along the over 8,000-kilometre Indian coastline. Artisanal or small fishers face highest life and livelihood risk. Traditional knowledge, which guides most fishers here, is not helping in quite the same way.

Weather uncertainties, changes in catchment areas and limited resources make their lives more complex in the context of climate change. Their motorized boats have limited range  – 40-50 kilometres at most. Long searches for fish or engine trouble can have serious consequences. This is where technology comes in.

The Indian National Centre for Ocean Information Services of the government of India has been observing oceans to provide information to scientists and society for over two decades. However, communities needed a technology interface, based on science, to use the information.

Scientists at M.S. Swaminathan Research Foundation in India, meanwhile, were identifying ways to build resilience among communities through knowledge services. Telecom companies were also exploring the opportunity to provide technologies for social good. The result was partnerships that created India’s first mobile app for marginalized fishing communities, about a decade ago.

Called the ‘Fisher Friend Mobile Application’ what made it unique, was constant discussion with communities. This meant it took longer to develop, with over 40 variations, tested with different groups for over five years.

However, that meant the content, information and language were suitable for the people it was intended for. Over the years, as research intensified, technology also underwent many changes and communities and development workers needed to keep pace.

The entry of corporate partner – global telecom major Qualcomm – enhanced support for this initiative, bringing in much-needed resources and technology to reach the end user, with the result that this app has now been rolled out in nine languages across India’s diverse land and culture in partnership with state governments.

It now reaches over 50,000 Indian fishing communities who are using the app on a regular basis. Most of all, over 500 fishermen’s lives were saved during cyclones and disasters, through the helpline service of this initiative and timely intimation given to the Indian Coast Guard.

The app helps support sustainable marine fishing, guiding fishers on fish catch locations, helping them minimize the risk and cost of their journey. A study found that it has also potentially increased their income by as much as 20-30%, or approximately $4,000 per catch, a quite significant amount for resource-poor fishers.

Ironically this decade-long journey in tech has been undertaken from the ancient historic Indian port of Poompuhar, in south India.

S. Velvizhi, the scientist who heads the ‘Fish for All’ Centre and who is from this region, says it has not been easy.

“Constraints of mobile instrument and data charges, connectivity strength and comfort at using smart phones are things we take for granted. Among these marginalized communities in remote locations, these are important barriers that we struggle against.”

However, for communities, understanding and using technology remains crucial. This is where foot soldiers make the final connection between disaster, resilience and technology, giving hope to marginal fishing communities that they can protect themselves better.

Now, as fishers of the region prepare for another long haul, they also look out on the seas more confident than they were before, because of a device as simple as a smart phone in their hand.

‘Republished from the original post on Thomson Reuters Foundation News’