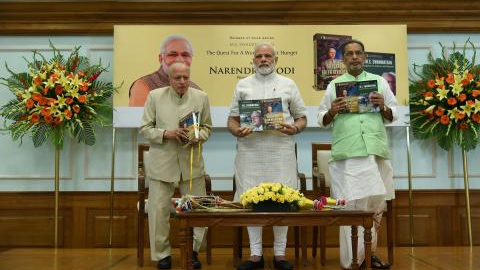 New Delhi, May 19, 2017: The Prime Minister, Shri Narendra Modi, today released a two-part book series on the eminent agricultural scientist Dr. M.S. Swaminathan. The series is titled – M.S. Swaminathan: The Quest for a world without hunger. Several Union Ministers and other dignitaries were present on the occasion.

Talking about challenges in the agricultural sector today, the Prime Minister said that the success in agriculture needs to be extended to eastern India; and scientific and technological interventions are required to make this a reality.

The Prime Minister said a combination of modern scientific methods and traditional agricultural knowledge would bring about the best possible results. Giving examples from some States, he said each district in India should have its own “Agri-Identity.” He said this can boost the marketing process, and help develop agri-clusters, on the lines of industrial clusters. The Prime Minister spoke of the target of doubling farm incomes by 2022, and said this requires a targeted approach in several key areas. He noted with satisfaction that the Pradhan Mantri Fasal Bima Yojana is finding much higher acceptance among farmers, than previous agricultural insurance schemes. He said this will help increase the risk-taking ability of farmers, and facilitate the process of taking innovation from “Lab to Land.”

Dr. M.S. Swaminathan thanked the Prime Minister for his words, and appreciated his vision. He emphasized the importance of synergy between technology and public policy.