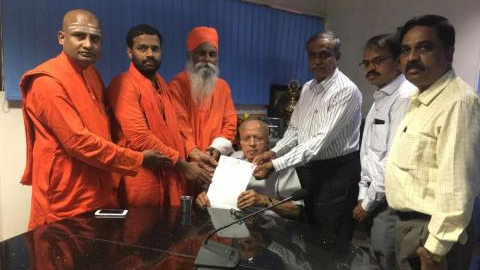 A delegation of representatives, on behalf of Dr Shivamurthy Murugha Sharanaru, the pontiff of the math, visited Professor Swaminathan on Thursday, August 23, to personally invite him to receive the award at a function to be held in at Chitradurga on a convenient date in October.

“We feel that honouring you is honouring the humanity. Your presence at Chitradurga will inspire the Math and their disciples in the furtherance of their service to society,” Dr Shivamurthy Murugha Sharanaru wrote in a letter to Professor Swaminathan. Representatives of the math presented the letter to professor.

Accepting the invitation, Professor Swaminathan expressed his difficulty in travelling to Chitradurga on account of health issues and nominated his nephew Dr K K Narayanan, an eminent scientist and Chairman of the company Metahelix, to receive the Basava Shree Award on his behalf. Professor Swaminathan will deliver a video talk, which will be relayed on the occasion to farmers and disciples of the math.

The Basava Shree award, which consists of Rs 5 lakh cash and a citation, was instituted in 1997 to honour the service of dedicated dignitaries, social reformers and the men of academic excellence for rendering yeomen service to the society in the field of literature, music, social reformation and global harmony.

The Shri Jagadguru Murugharajendra Brihanmath is a religious institution in Karnataka. It has been working for the social, economic and cultural uplift of communities that were downtrodden and considered untouchable in India in general and the state of Karnataka in particular. The math carries forward the ideals spread by Sri Basaveshwara, who led a spiritual movement that brought together a team of ‘sharanas’, including women,from different castes, occupations and classes.