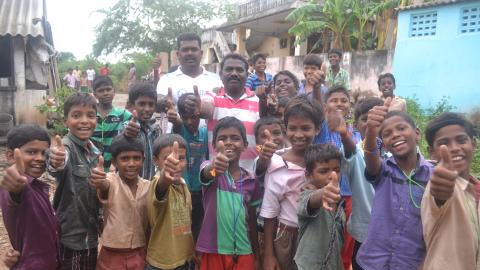 Pudukottai, November 2016: The day begins as early as 4:30 am for a group of children in Mangudi village of Pudukkottai district Tamil Nadu. Their objective – creation of greater awareness about community sanitation especially open defecation among people in their village. As they move around on cycles or on foot along open defecation locations, their whistles are a shrill reminder for people to use toilets.

This initiative is implemented by M S Swaminathan Research Foundation in partnership with DRDA, Pudukkottai as part of a project funded by the State Balanced Growth Fund of State Planning Commission, Tamil Nadu. Before the initiatives, MSSRF triggered awareness among school students’ groups about village sanitation, which created an impact on them. Since then, children have become change agents. A group of students now is involved in regularly in creating awareness on sanitation and prevention of open defecation.

So nowadays, early each morning they stand in known open defecation spots and actually go up to people who are coming out to defecate in the open, to use individual or public toilets! If there are people who do not have toilets, the students request them to construct toilets in their houses. As a temporary measure, those who have defecated in the open are requested to cover their faeces with sand to prevent infection.

The children also sing songs and slogans about sanitation and against open defecation in common places and walk in a procession on the streets of their village. Over 30 students have been actively involved in these initiatives that began in September 2016.

In this village all the people were jolted awake to the importance of the situation, within a few days, 60 toilets were newly constructed, 65 unused individual toilets began to be used by family members and the level of the open defecators was minimized by the various student initiatives.

MSSRF is also continuing this unique sanitation campaign along with other awareness programmes among communities in this district, working towards creating open defecation free villages in the region.