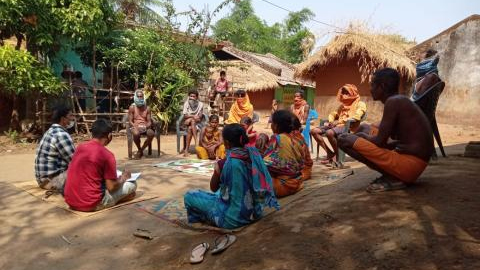 To ensure that people get entitlements as part of COVID-19 relief, a rapid survey covering about 2750 households in 57 revenue villages across Odisha’s Koraput district, has found that

500 rights holders are yet to receive benefits. The survey by MSSRF in April 2020 was conducted through Focus Group Discussion in each hamlet/village with the active participation of village ward member, village youth, and other leaders of the village, maintaining proper social distance. The information received was verified with the concerned households, names recorded and further verified with the Sarpanch of the respective Gram Panchayat. The details have been handed over to the district administration and assistance offered to the government to ensure that these benefits are delivered to those who are entitled to them.

The survey was carried out in Koraput, Boipariguda and Kundra blocks of Koraput district. As part of Covid Response by the government of Odisha PDS grain was distributed at the village level (ward-wise) for three months. Rs. 2000/- per eligible beneficiary was given as an advance social pension for four months (April to July) to beneficiaries including elderly persons, widows and physically challenged persons under the Madhu Babu Pension Yojana and under National Social Assistance Programme. Free Kitchens have been started in Gram Panchayats for giving food to the poorest of the poor people (Nirashray). Cooking gas cylinder was provided under Ujwala Yojana and allowance of INR1500 given to registered construction labourers.

Table 1: Number of eligible individuals (male and female) who had not received Covid relief in villages surveyed, Koraput district

Note: Includes *one unmarried woman in Kundra; and @one widow in Boipariguda who was also not getting PDS ration

The village-wise lists have been submitted to the Block Development Officer of each Block and to the Sarpanchs of the nineteen Gram Panchayats under which the villages fall, requesting necessary action so that the needy are not deprived. MSSRF has also offered to assist the administration in this process, as maybe required. To start with, the BDOs have assured that in the absence of ration cards, eligible individuals will be permitted to avail of food served in the free community kitchens.

A submission of the consolidated list covering villages surveyed in the three blocks is also being made to the District Collector, Koraput district.